The retired former prime minister and former head of the Social Democrats, Milos Zeman, is once again in the centre of attention. The outspoken former party leader first came out of retirement early last year when he ran for president - and was defeated by rival Vaclav Klaus. After then disappearing from the political scene, Mr Zeman reappeared before the public last weekend and pulled no punches in criticising the current situation in the Social Democratic Party. Although he once again declined to comment on any specific plans for his future, Mr Zeman did hint that, if certain conditions were met, he would be willing to return to politics. 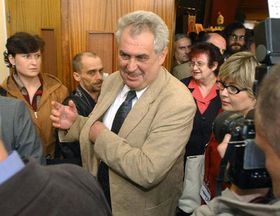 Milos Zeman, photo: CTK "Every party needs to exterminate the rats at some point", said the former politician, famous for his frequent blunt remarks, at Sunday's party meeting in the northern town of Most. In that statement Mr Zeman further developed a metaphor he used last September when he likened the government of his successor, Vladimir Spidla, to little grey mice - who, if left unchecked would turn into rats.

Earlier today I spoke to political commentator Vaclav Zak and asked him whether Milos Zeman had a point when he accused the party of betrayal?

"Well, I think if they "betrayed" the manifesto, it might have been because the manifesto was quite unrealistic and I think this was the point. When the government was formed, they found what amount of debt and deficits they were running and they decided that they had to change it. It was a very reasonable decision but Mr Zeman largely underestimates this danger. That's the problem."

Mr Zeman usually says he will return to politics only if his party asks him to. This time he said he would come back on condition that an extraordinary party congress is convened. Is that likely, do you think?

"Well, I think it is rather unlikely. It is very complicated, it must be voted by a qualified majority, 2/3 of members, I think, and it must be voted in a large number of regional branches. So I don't think that this is likely but, of course, the situation can change, if the Social Democratic Party is heavily defeated in the upcoming elections."

How much support does Mr Zeman still enjoy among his party colleagues?

"I think that rather very small, marginal support. His position is largely overestimated. It is a pity. I thought he was a reasonable man when he left politics, when he was the best politician in the last years. But now he is rather spoiling what he has done."

Do you think that Mr Zeman still has something to say after so many months in retirement? Hasn't the world moved on in the meantime?

"Well, if I listen to his speeches and I analyse his proposals, I have to say it would be a great mistake and it would be a problem for the Czech Republic if Mr Zeman did return to office."