For the past 12 years Pavel Minarik has found himself in and out of Czech courtrooms. The former secret police agent's latest battle with the law ended this past Friday. What is he accused of? Why was he acquitted? 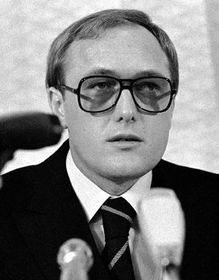 Pavel Minarik, photo: CTK The charges against Mr. Minarik were dropped yet again, this time on Friday in Brno. He was accused of planning to blow up Radio Free Europe during the 1970s. At that time he was an editor at the radio station, then based in Munich, Germany. A bomb actually did explode at Radio Free Europe, but not until 1981, when Mr. Minarik was far away in Kiev, Ukraine.

That more than thirty years had elapsed before the recent trial didn't help prosecutors. Still, that's just one factor which helped set Mr. Minarik free again. The spokesman for the Office for Documentation of Crimes of Communism Jan Srb elaborated on his dismay with the verdict:

"Taking into account that the attack on what was then the building of Radio Free Europe in Munich was planned back in the first half of the 1970s and after 1990 Radio Free Europe moved from Munich to Prague, there were hardly any archives or documents from that time saved at all. So, the court's claim to work out the estimated damage that would have been done if the act had been actually committed was very difficult. Nonetheless, I think that our investigator satisfied the court's claim because we had obtained three written materials. One of them helped us to find a document from America, one which stated that Radio Free Europe's master control room, which the accused wanted to destroy, was then worth three million dollars. Our penal code states that back in the 1970s in order to be considered binding damage the value must be at least 200,000 Czech crowns (around 6,000 USD at today's exchange rate). I personally think the court could have made an entirely different decision. I think there was enough evidence. But the court demanded an expert opinion which understandably wasn't arranged."

However, in other areas specific evidence is also lacking, especially concerning the questions how exactly Mr. Minarik planned to carry out the bombing, and what kind of bomb he intended to use. Still, some Czechs have trouble stomaching the verdict. Jan Srb again:

"A fairly large part of society today isn't interested in the problems of the past years. On the other hand, there are enough people who are very interested in this sort of thing - people who were persecuted in the past or whose relatives were persecuted. Their reactions are very negative. They are sad and angry that nowadays, thirteen years after the fall of communism, we are still not able to straighten these things out."