The former Czech president Václav Havel has just been awarded the German Point Alpha Prize for his contribution to German, and European, unification. Tuesday’s ceremony did not take place at the usual venue – the former border between East and West Germany – but at the German Embassy in Prague. The embassy itself has also been marking an important chapter in its own history. 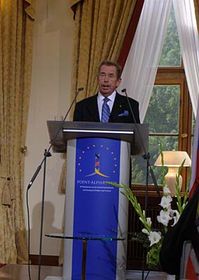 Václav Havel, photo: Gerald Schubert It was a Czech piano concerto – by Leoš Janáček – which resounded around the German Embassy on Tuesday as former president Václav Havel received the Point Alpha Award for his contribution towards German, and European, unification. Previous recipients of the prestigious award include George Bush Sr., Mikhail Gorbachev and Helmut Kohl. Mr Havel glowed as he spoke at Tuesday’s ceremony:

“I don’t think of this award as being dedicated to me and only me - but instead this prize is for all who have chosen a certain sort of engagement in society, and for all who have fought non-violently, but at great personal risk, for human dignity and freedom.”

The award is normally handed out at the Point Alpha observation post itself, on the former border of East and West Germany. But for reasons of Mr Havel’s health, the prize ceremony was this year shifted to the German Embassy, which is housed at the Lobkovický Palác in Prague’s Malá Strana. 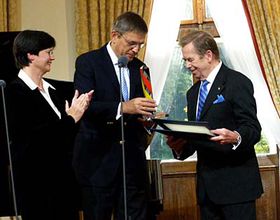 Václav Havel receiving the Point Alpha Award, photo: Gerald Schubert The location and the date of the ceremony were no less meaningful, however, as it was precisely 19 years ago today that the first wave of East German immigrants departed from this – the former West German Embassy - which provided them with a safe passage to the other side of the Berlin Wall. Václav Havel remembered the events of late September 1989:

“I said to myself ‘this is serious, and if this is possible for Germans, then sooner or later this thing is going to affect us all’. And I noticed something interesting at this time; that my fellow Czechs were sympathetic towards the German refugees escaping to the West. This was a time when people here were no longer ruled by fear, and when Czechs were willing to help others in difficulty, regardless of the political risks.”

Within two months Václav Havel himself was spearheading a revolution which put an end to communist rule in his own country - Czechoslovakia. On Tuesday, he was awarded for his tireless activity, both as a dissident in the run-up to this time, and as a statesman following the revolution.