Images of several Czech Romany families setting up home in a Toronto airport were aired by Canadian television over the weekend. On Wednesday, Czech authorities said the last of those pictured had moved out from the airport to a nearby town, but the images have fuelled speculation that visa restrictions may well be reintroduced for Czechs traveling to the North American state.

On Sunday, Canadian broadcaster CTV reported that around 30 Czech Romanies were living in Toronto’s Pearson Airport, awaiting an interview with immigration police. The report showed families of Czech Roma receiving food handouts from airport employees and sleeping on benches in the hub’s Terminal One. At the time, the Czech Foreign Ministry said they knew nothing about the asylum seekers, but on Wednesday a ministry spokesman said that the last of those pictured had left the airport for a nearby town.

Those questioned by reporters said that they were staying at the airport because it cost nothing and was convenient for the interviews they would have to attend with immigration officers. Police security patrolling the airport said that they had no plans to eject the refugees. When it broke, Sergeant Kevin Greenhagh said this to CTV:

“I mean, they’re not causing a problem, we are aware of them, and I’m sure the problem is going to rectify itself in the next couple of days, so we’ll just keep an eye on them in that time.” 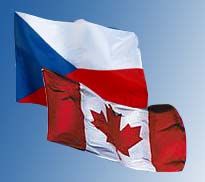 Staff may have been unworried by the number of Czechs camping out at the airport, but the footage has prompted speculation that Canada may re-impose visa restrictions for Czechs – speculation which was already mounting when it was revealed that some 853 Czechs applied for asylum in Canada last year.

Michael Vlček is a spokesperson for the Canadian Embassy in Prague. He says, for the moment, nothing has changed:

“Well the increase in refugee claims from the Czech Republic in Canada is a real concern, and Canada is monitoring the situation closely. Visa exempt countries are aware that if they don’t satisfy the conditions of Canada’s exemption, the requirement for a visa may be re-imposed. However, if one criterion is not met, it does not mean that the visa-requirement on a country will be automatically re-imposed.”

So far this year 653 Czechs have applied for asylum in Canada, if that number crosses 1,000 by the end of the year many think that Ottawa may well, as it did in 1997, re-impose visa restrictions for Czechs traveling to the country.