Czech tennis player Tomáš Berdych came close to his first Grand Slam crown at Wimbledon as he faced world’s number one, Rafael Nadal, in Sunday’s final. But the Spaniard outclassed the Czech underdog and wrapped up the match in just three sets, spoiling Berdych’s hopes of becoming the first Czech since 1973 to win the tournament. 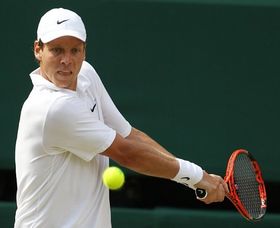 Tomáš Berdych, photo: CTK The world’s number one and second seed at Wimbledon, beat Tomáš Berdych 6:3, 7:5, and 6:4 in Sunday’s men’s final, in two hours and 13 minutes. Berdych was unable to repeat his spectacular performance from the previous rounds, when he created upsets beating both the top seed, Roger Federer, in the quarterfinals, and third seed Novak Djokovic in the semis. After the game, Tomáš Berdych told reporters why he thought Rafael Nadal prevailed.

“I think the biggest difference between us was that when he had a chance, he just took it. He gave me one chance in the second set and one in the third, but I was unable to convert either of them. That just shows how strong he is, and I think it was all about this small difference.” 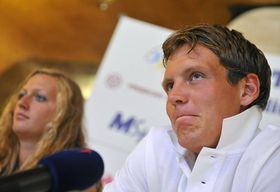 Tomáš Berdych, photo: CTK Given his sensational advance through the tournament, many Czech experts favoured Berdych in the final as well. But the Spaniard showed little mercy with the upcoming Czech star, and controlled the game from the start. He first broke Berdych’s serve in the seventh game, and took the first set in just 34 minutes. In the first game of the second set, the 24-year-old Czech had three break points, but Nadal saved them all, and Berdych never found the strength to offer serious resistance, losing 5-7.

The third set was similar; Nadal played a waiting game, converting the first match point against Berdych’s serve at 5:4.

Unable to repeat his performance from earlier stages of the tournament, Tomáš Berdych said he still has a lot to learn and room to improve.

“Right now, I am of course disappointed. It was my first final and it could have gone better than this. But still, it was valuable experience for me and I hope that I can work with this experience the way I did after reaching the semi-finals in Paris. So if I can do the same with what I learned by going to the finals, it will be great.” Rafael Nadal, Tomáš Berdych, photo: CTK After Wimbledon, Tomáš Berdych moved up five notches to become the world number eight in the ATP rankings. But his fans will have to wait until early August to see him back in action – at an ATP tour event in Washington. Citing muscle injury, the best Czech tennis player will not be joining the Czech team for the Davis Cup quarterfinals against Chile over the weekend.