Czech political activist Martin Konvička staged a highly controversial publicity stunt in Prague’s Old town Square on Sunday afternoon. He and a group of followers decided to stage their interpretation of an Islamic State “invasion” of the Czech Republic. The so-called “performance” caused panic among a number of tourists, who believed a terrorist incident was unfolding. Martin Konvička, photo: CTK The day – the anniversary of the 1968 Soviet invasion of Czechoslovakia – was chosen deliberately by Martin Konvička, a long-time critic of Islam, to help underscore the perceived point. The aim was to stage a dramatization of an “invasion” by the terrorist group Islamic State. On Sunday, shortly after 2pm, the “performance” began to unfold. Konvička, dressed in the white garb of a Muslim Imam, drove into the tourist-packed Old Town Square on a jeep, accompanied by a camel and a group of “Islamic State soldiers” dressed in army fatigues and brandishing imitation firearms and shouting “Allahu Akbar”.

Prague Metropolitan Police spokesperson Tomáš Hulan confirmed that the organisers had received permission for a “performance” to take place from 1pm to 5pm, including the use of imitation firearms:

“The performance started around 2pm. Around 15 minutes later, the imitation gunshots began to sound. This caused a panic on Old Town Square, because many people did not know what was going on, and thought a real terrorist shooting was taking place. Some then tried to flee the scene or to seek cover.” Martin Konvička, photo: CTK Indeed, a number of tourists confirmed being decidedly alarmed by the unfolding “performance”. However, the incident did not appear to result in any widespread panic or mass stampedes away from the scene. Nonetheless, a number of Czech politicians condemned the stunt, with interior minister Martin Chovanec describing it as “an expression of political and civic cretinism.”

Back in 2009, Konvička, a natural biologist by training, co-founded a Czech grassroots political initiative called “We Don’t Want Islam in the Czech Republic”. This then morphed into the short-lived Bloc Against Islam party, headed by Konvička, who today heads a grouping called the “Martin Konvička Iniciative”. All these efforts are centred on opposing the perceived dangerous Islamisation of Europe.

Although the planned “performance” was then immediately curtailed by the police, Tomáš Hulan confirmed that the participants were not arrested. However, eight members of the group were asked to proceed to make a statement to the police, and consented to do so without protest:

“The Prague Police Service is now investigating the entire event in order to determine whether to press charges for disturbing the peace. We are also not ruling out pressing charges for spreading false alarm. But this process is just beginning, and still in the hands of criminal investigators.” 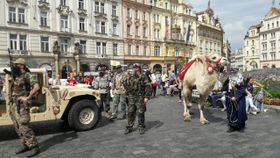 Photo: CTK Speaking after the event, Mr. Konvička stated that he had sought to shock, and sought to portray the first steps of a totalitarian takeover of the country. The activist also lamented being prevented from staging the entire performance as originally planned, which was also set to include an Islamic State faux “beheading” of President Miloš Zeman for his supposed fierce opposition to the terrorist group. 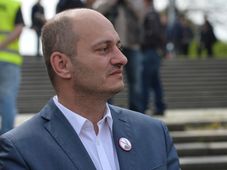 The movement Bloc Against Islam, which had hopes of running on a joint-platform with the Dawn party in regional and Senate elections…