Experts gather for Prague conference on cyber terrorism and crime

As we spend more and more of our lives online, we’re exposing ourselves to the more nefarious aspects of the internet – spam, viruses, phishing, extremist websites, even cyber warfare. How to fight such threats is no longer the domain of computer geeks – governments around the world have whole departments to tackle the issue. The problem of cyber terrorism and cyber crime is being discussed this week at the Cyter 2009 conference in Prague, as part of the Czech EU Presidency. 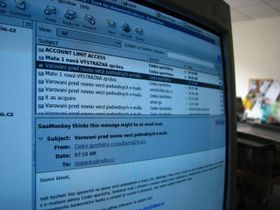 The internet has become a natural home for a huge number of different groups espousing views which are abhorrent to the large majority of society, from neo-Nazis to militant Islamist groups. How to deal with them is just one of the many themes at this year’s Cyter conference, which covers everything from extremist websites to cyber warfare to spam. People and businesses everywhere are engaged in a twin struggle to keep up with modern technology on one hand and protect their data, privacy and finances on the other. Mark Lambe is from a marketing company in Ireland.

“OK, the threat is real. Anybody who’s using or has any contact with data, even radio - there’s some storage facility somewhere that’s keeping this recording. There’s nothing sensitive in the information that we store here in this conversation, but when it comes to banking details and when we’re transmitting our banking details even in a wireless world, these details can be widely and easily exploited to the profit of another individual. So anybody who has any sort of data – you’re not in a safe position. So we must take it very seriously.”

As for how to tackle the myriad problems and vulnerabilities created by the virtual world we now all inhabit, there are many suggested solutions and little consensus, even on a European level, on how to implement them, due to different opinions on the freedom of speech, the right to privacy and so on. And as the Czech Republic’s deputy Interior Minister Zdeněk Zajíček freely admitted, the cyber criminals will always be one step ahead.

“The criminals don’t worry about whether people’s rights are being infringed. The state, however, must ensure that its citizens feel safe while respecting the privacy and rights of others. And that’s where the state is at a disadvantage. That’s where the decent members of society, who take into account the rights of others, are at a disadvantage, and where the criminals and those who want to violate the rules are at a great advantage. In that sense we’ll always be one step behind the criminals, and perhaps we shouldn’t even try to catch up with them. But on the other hand prevention – and the ability to share information and stand on the right side – that’s clearly our obligation.”

There are no easy solutions then in a battle against cyber terrorism and cyber crime, and even officials admit that this battle will most likely never be won. But as we spend more of our time and money online, both states and individuals are being forced to devote more of their time and resources to protecting themselves as best they can.