The L-200 Morava is a Czech-made retractable four-seat light aircraft designed in the mid 1950s. It was one of the few light aircraft to be exported from behind the Iron Curtain during the Cold War era and remains a favourite with many pilots today. Two Czech pilots – Petr Bold and Richard Santus – have decided to mark the plane’s fiftieth birthday anniversary by flying it to the North Pole and back. I spoke to Richard Santus earlier today to find out more about the plane and expedition North Pole 2008:

“This plane was unique in its day, it guaranteed very good performance and is still being used by flight schools for basic training of airline pilots. The plane is very reliable and we would like to pay tribute to the skills of the designers who made it in the 50s.”

How dangerous is this expedition and what exactly are you going to be doing? 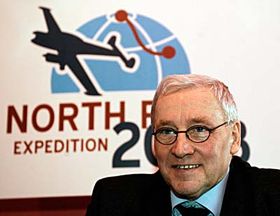 Petr Bold, photo: CTK “Well, it is not dangerous as long as nothing happens. The plane has two engines and if they are functioning normally then nothing should go wrong. Of course there is always the danger of technical malfunction and the other danger is the weather. We will have a temporary base at Svalbard in Norway and we will stay there for approximately twenty hours and when the weather allows we will set off for the North Pole. We plan to make a few orbits there and then fly to Barneo, a Russian airbase, to refuel and then we will fly back to Svalbard. If the weather is good all the way then nothing should go wrong.”

If something does happen, I understand you might have to make an emergency landing on an iceberg – are you prepared for that kind of thing?

“Yes, the thing is that up to 82 degrees North latitude there is ocean – I mean water – and from that point on there is ice. So we have to be prepared to make an emergency landing both on ice and on water. We have emergency equipment and we are prepared for both options, but I very much hope that it will not happen.”

What do you have with you for such an emergency?

“We have a dingy, we have life-vests, a rifle and a signal pistol, we have food and water – we basically have everything we need to survive in cold water or on an iceberg for some time. And if we have to make an emergency landing they would send a rescue helicopter from Svalbard or from the temporary Russian airbase near to the North Pole so there is no serious danger that they wouldn’t find us should we crash.”

There could be polar bears out there….

Photo: CTK “Yes, that really might happen. It happens every year a number of times that polar bears attack humans and for that reason we are obliged to carry the gun.”

You are setting off on April 1, when are you due back?

“The thing is that the Russian air base is there for only one more month because in April the weather is still cold and the ice is thick enough to carry the weight of an airplane. If this weather does not last until the end of April then we will have to go back to Svalbard without reaching the North Pole because we would have nowhere to refuel but we hope that the good weather will last and we will accomplish our goal by the end of April.” At the weekend two Czech pilots made history by flying a vintage Czech aircraft to the North Pole. The small twin-engine plane known…