Czech football fans are in for a treat with the news that Viktoria Plzeň are set to welcome one of the world’s biggest clubs, Real Madrid, in the Champions League. The domestic title-holders will also face Roma and CSKA Moscow in Europe’s top international club competition. 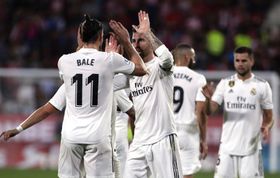 Real Madrid's Gareth Bale celebrates scoring the goal during the Spanish La Liga match between Girona and Real Madrid, photo: ČTK/AP/Eric Alonso Viktoria Plzeň were in the fourth and final seeding pot during the star-studded draw for the group stage of soccer’s Champions League in Monaco.

But for fans hoping to get to see some of the world’s most gifted players in the flesh it was well worth the wait when the West Bohemians went into the same group as Real Madrid, the mega club that lifted the Champions League trophy for an unprecedented third time in succession in May.

Real will visit Plzeň’s Doosan Arena on November 7. On Thursday the venue hosted a public screening of the draw attended by squad members, including captain David Limberský.

“In the end it worked out well. I think Real were the dream of most of the guys in the squad. So we’re satisfied.”

Limberský’s teammate Roman Procházka was also pleased by the draw, if disappointed that Cristiano Ronaldo is no longer at Real.

“It’s a bit of a pity. He may be the best player in the world so it’s a little disappointing. But I was hoping to get Real and we have. I think the group is attractive, both for the fans and for us players.”

The other two teams in Group G are CSKA Moscow and Roma, who got to the semi-finals last season.

While fans will surely enjoy Plzeň’s two games against Real, unless they suffer utter humiliations, coach Pavel Vrba was hoping for a different opponent from the eight top-seeded sides. 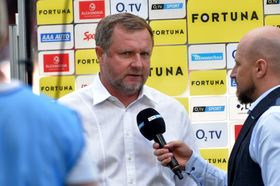 Pavel Vrba, photo: ČTK/Slavomír Kubeš “I wanted Lokomotiv Moscow, of course. In the first pot they were the one opponent that I thought it would be possible to win some points from, and therefore also make some money. For us the first pot looked really tough, otherwise. It will of course be very difficult for us. Reasonable fans will understand what I’m saying; unreasonable ones won’t.”

This isn’t Viktoria Plzeň first time at European football’s top table. They reached the Champions League after their first domestic title in 2011 and came third in a group that also included Barcelona, AC Milan and BATE Borisov.

They again came third in the 2013–2014 season in a group that pitted them against Bayern Munich, Manchester City and CSKA Moscow.

If Plzeň manage to repeat that placing, realistically a best possible scenario, they will once again go into Europe’s second tier competition, the Europa League, in the new year.