Wondering what a 10 billion Euro investment can do for a village? Dolní Břežany was lucky enough to find out. It now houses an EU research facility containing some of the world’s most powerful lasers. Scientists expect the centre may help in research ranging from star exploration to combating cancer. They are now working on the centre’s most powerful laser yet. 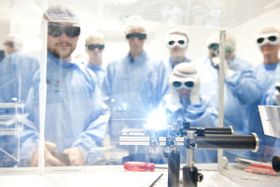 ELI Beamlines, photo: Filip Jandourek / Czech Radio If you have ever seen the famous destruction of Alderaan in Star Wars you may remember that the Death Star creates a powerful laser beam made up of several connecting smaller beams.

The ELI Beamlines newest laser system works on a similar basic principle. A series of front-end lasers shoot into valves which increase the power of the final shot.

ELI stands for Extreme Light Infrastructure, a project initiated by Nobel Prize winning physicist Gerard Mourou, through which the European Union hopes to co-operate on the investigation of light-matter interactions at the highest intensities and shortest time scales.

That means building research centres in the Central and Eastern European member states that will enable groundbreaking research not only in physics, but also in biomedical research and laboratory astrophysics.

The most advanced of these research centres is located in Dolní Břežany, a village on the outskirts of Prague. It was built in a joint EU and Czech funded project worth EUR 10 billion.

The building houses around 100 Czech and foreign scientists who are currently finalising their L4 laser, which should be capable of firing a 10 petawatt laser beam.

A petawatt is one billion million watts and the L4’s power burst will be equivalent to being exposed to the sun’s rays through a computer screen for a short moment. 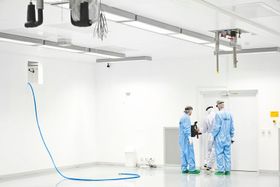 “The L4 is built out of two smaller front-end lasers. They built and tested one of them already last autumn. In the past few months they have been working on the second short-pulse front-end laser, which will then be amplified.

“Right now scientists are preparing to further increase the power of the front-end laser, which is now able to shoot a burst equivalent only to one kilojoule - the power needed to heat one espresso.”

Originally, the team in charge of the project planned to dismantle and re-assemble parts of the laser in order to understand how the cooling system works.

However, team leader Daniel Kramer, told Czech Radio that progress on the L4 is going faster than he expected and scientists can therefore direct their focus on increasing the second front-end laser’s power.

The most optimistic forecast is that the whole laser system will be ready by the end of the year. 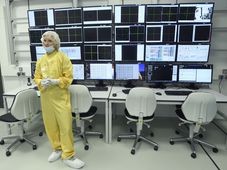 World's “most intense” laser system launches outside of Prague

The world's “most intense” laser system went online this week in the Czech village of Dolní Břežany outside of Prague. Known as the L3-HAPLS,…