Jablunkov is the most eastern town in the country just few kilometres away from the borders with Poland and Slovakia. Dita Asiedu has been following the developments there: 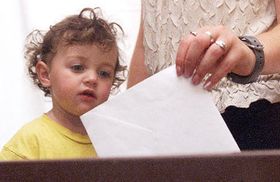 Photo: CTK The town of Jablunkov with a population of a little under six thousand is a melting pot of different cultures and languages. A quarter of the population is Polish and three percent are Slovak. So, in such a town, one would expect everyone to go to the polls and vote yes in the referendum - neighbouring Poland and Slovakia did so in recent weeks. But it seems that some people of Jablunkov have not let these developments influence their own decision making. Many citizens I spoke with, not the majority but a significant part, expressed scepticism and fear and have been very hesitant to vote in favour of a future within the EU:

"I have heard many say they would vote against EU membership. It is because people here do not really know what the EU countries are like and therefore do not know what to expect. So, they say no."

"I voted no because I think the disadvantages outweigh the advantages."

"I voted for EU membership but to tell you the truth, I do not know why. I will get nothing out of it, my children probably will not either but with some luck, if all goes well, my grandchildren will benefit."

"I said yes but only because of my children. Personally, I feel we should have waited a few more years with EU accession."

"Of course I said yes. We have no other choice. We cannot stay isolated. But some people I know are against membership. They are quite pessimistic about what the future holds for them because this is a rather poor region."

Much to my surprise, it was mostly the elderly who were the first to go to the polls to cast in their votes and thanks to Jablunkov's Mayor, Petr Sagitarius, who has put much time and effort into warning the citizens of his town about the dangers of becoming an isolated country if the Czech Republic fails to join the EU, many of them voted for it. The country, he says, can go in only one direction, that chosen by other central and east countries:

"If we realize that the Slovaks and Poles will be in, then we have to be there, too. At this time, all countries around us have said yes and I can't imagine what would happen if we stayed out. We would really isolate ourselves. I welcome this positive pressure, I think it is a matter of prestige to be become members."