Every year, dozens of countries around the world mark Earth Day on April 22nd. Czechs joined the worldwide campaign for preserving the global environment in 1990. This year, the main focus is on a big clean-up.

Earth Day has been observed since 1970 in more than 140 countries world-wide. In the Czech Republic, it was first observed in 1990, a few months after the fall of the communist regime. Every year, an increasing number of citizens and local authorities have taken part in events demonstrating their share of responsibility for the state of our planet and their immediate environment. Petr Svec, the national coordinator of the Association of Healthy Towns, says that Earth Day is primarily a campaign informing people about the importance of environmental issues:

"The Earth Day highlights the fact that sustainable development of planet Earth is in the hands of all people in the world. It aims to stimulate local activities in towns, cities and regions to make people aware of the importance of environmental protection and stimulate them to act." 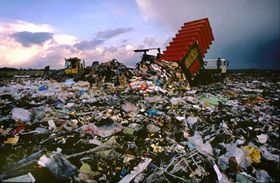 Waste dump, photo: European Commission A number of events have been taking place across the country all week to mark Earth Day. The common idea of many of them is a big clean-up, in which locals can take place. There have also been environment-inspired competitions for schoolchildren, exhibitions, and information campaigns promoting waste recycling.

The Czech Republic has committed itself to recycle 52 percent of all waste packaging by 2005. By the same date, three quarters of inhabitants should be separating household waste, as compared to the current 62 percent. Whereas in 1997, every 8th town had special containers for separated waste, now it is 92 percent and no-one needs to walk farther than three minutes to reach them.