Does appearance with anti-Islam group signal new departure for Zeman?

President Miloš Zeman spoke at a rally organised by Bloc Against Islam in Prague on Tuesday, telling cheering supporters that Czechs are not racist because many people from compatible cultures have been welcomed in the country. Mr. Zeman has a reputation for fiery rhetoric on the subject, but was his public alignment with an anti-Islamist group of a piece with his previous pronouncements, or a new departure? And what is the president’s endgame? 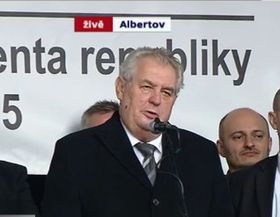 Miloš Zeman, Martin Konvička, photo: Czech Television The Czech president was rapturously received by the crowd – many carrying Long Live Zeman signs – at Prague’s Albertov on Tuesday at an event in the Czech president’s support organised by Bloc Against Islam.

The head of state later sang the national anthem alongside Bloc Against Islam’s leader, Martin Konvička, and the head of the populist Dawn party.

“But the opposite view cannot be silenced in a genuine free society and should not be described using labels, or even insults, such as extremist, xenophobe, Islamophobe, racist or fascist. Labels and insults are not an argument.”

Mr. Zeman is known for fiery comments about Muslims and the UN high commissioner for human rights recently accused of him fueling xenophobic public discourse thanks to his repeated Islamophobic statements.

But was Tuesday’s public alignment with Bloc Against Islam of a piece with his previous rhetoric or a new departure? Political scientist Jiří Pehe, who has clashed with Mr. Zeman in the past, believes it was the latter. 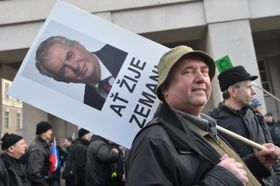 Photo: CTK “When he goes to a public rally organised by an anti-Islamist group which is openly propagating hate against Islam and against refugees – which in my opinion borders on being unconstitutional and should be prosecuted, because Islam is one of the three religions and is official allowed to exist in the Czech Republic and in Europe – then of course the president reaches a completely new level. Because he has allied himself with basically extremists, and that makes him an extremist as well.”

If Tuesday’s appearance does signal a shift in approach from Mr. Zeman, what is behind the move? Commentator Erik Best says he may be reacting to the anti-immigrant mood among Czech society with a view to a future re-election campaign.

“Zeman understands what the average Czech voter wants. He’s very good at identifying that and acting in advance, doing things that precede what is happening in the world. And it’s paying off very well for him. A poll last week showed that if he ran again for president in two and a half or three years he would win. So from that standpoint if his goal is to win again or to be popular, I think he has probably found the way to do it.”