Czechs and Slovaks marked the 16th anniversary of the start of the 1989 Velvet Revolution on Thursday, a time when people remember the overthrow of Communist rule and reflect on the changes that have swept society since then. But discontent is growing with the current political situation, and that discontent was reflected in the mood on the streets of Prague. Radio Prague's Rob Cameron has this report. 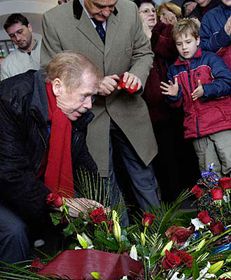 Vaclav Havel, photo: CTK A small crowd gathered round candles laid at the spot in Prague's Narodni street, where on November 17th, 1989, riot police began beating student protestors who'd gathered to demand change in Communist Czechoslovakia. The brutal suppression of that demonstration led to a chain of events which ended six weeks later in dissident playwright Vaclav Havel becoming the first non-Communist president of Czechoslovakia for forty years. Vaclav Havel is now enjoying his political retirement, but said it's vital that Czechs remember the events of November 17th 1989. 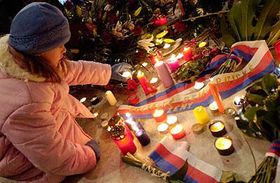 Photo: CTK But many people are disillusioned with the state of Czech society, 16 years since the fall of Communism. Among those who knelt to light a candle on Narodni street was Mirek Topolanek, leader of the centre-right opposition party the Civic Democrats.

"I'm afraid that this date, this 16th anniversary of the start of the Velvet Revolution now has a new dimension. We have a socialist government, and the socialists are co-operating with the Communists in parliament, and I'm afraid we have to renew this anniversary for the second time. Not only the anniversary, but the fight against Communism and support for freedom, democracy and the values of November 17th, 1989." 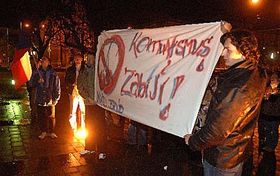 Photo: CTK Further down the street a free rock concert was taking place, organised by the right-wing Young Conservatives. Called "We Won't Remain Silent", it was an attempt to encourage opposition to the modern-day Communist Party. Young Conservative leader Tomas Sokol told me the Communists remained a danger to Czech society.

"I think the reason not to believe them when they say they've changed is the name of the party. I can't imagine that the Italian fascists, ten years after the end of the Second World War, would call themselves the Fascist Party. Even they renamed."

But events such as these - for the most part poorly attended - seem to have little power to change political reality in the Czech Republic. Only next year's elections will tell whether Czechs really have the stomach for a minority left-wing government propped up by a largely unreformed Communist Party.