Ask any Czech who is old enough to remember the Communist years what comes to mind when they hear the name Cerne Jezero, or the Black Lake. They will tell you that it is in Bohemia's Sumava region and the place where several chests containing Nazi secret police documents were found. The fact that the chests were actually placed there by Czechoslovakia's own secret police, the StB, only came to light after one of their agents defected and wrote a book about the operation. But now, the original StB documents with detailed information about the plan can be found on the web:

Back in 1964, four chests believed to contain secret Nazi intelligence documents were found at the bottom of the Black Lake. They were retrieved by a group of divers during the making of a Czechoslovak TV documentary. Since it was believed that the Nazis had sunk a number of chests with stolen treasure and secret documents in the lake, the Czechoslovak intelligence was called to the scene. The chests were taken to Prague and the interior minister at the time proudly declared that a list of all Gestapo collaborators was amongst other secret documents in the chest.

At the time, nobody even suspected that the chests had been put there just a few weeks earlier - naturally not by the Nazis but by Czechoslovakia's own intelligence service. Together with the KGB, they had been in possession of documents on Nazi collaborators since the end of the war but were waiting for an opportunity to make them useful. The time was ripe in the 1960s as the documents proved that West Germany's secret service was still using a network of agents that also served the Nazis and that influential government officials had already served under Adolf Hitler. Interior ministry historian Petr Cajthaml: 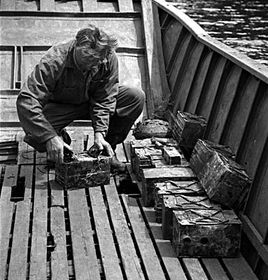 Photo: CTK "It was the Cold War and the goal was to re-awaken interest and discredit West German politicians. Another goal was to have the statute of limitations for war criminals, which would have expired in 1965, extended. Following the extensive media coverage, the countries that suffered during WWII demanded that the statute be prolonged. Germany eventually extended it and then agreed that there be no limited time in which their war criminals could be tried."

The divers that retrieved the chests were actually led to them by a man named Ladislav Bittman, who in reality was an StB agent specialising in misinformation campaigns. To make the chests look authentic, the corrosion process was studied carefully so that the rust on the metal parts looked like the chests had been in the water for twenty years.

"The chests that were put there contained normal white paper as the real documents that were later shown at the press conference got to Czechoslovakia from the Soviet Union weeks after the chests were retrieved. The first time that the disinformation campaign came to light was in 1972. Ladislav Bittman, who himself ran the operation emigrated in 1968 and made the operation public a few years later in a book called 'The Deception Game' that came out in the United States."

Details of the operation can now be found on the internet. The Czech civilian intelligence has posted the original StB files on the operation dubbed "Neptune" on its website.