The Czech Republic is to take in some 80 refugees from Turkish refugee camps under a European Union agreement. The country received details of the applicants earlier this month, and each will be vetted by the security services. Following the recent terrorist attacks in neighbouring Germany, some have already expressed opposition to their arrival – namely ANO leader Andrej Babiš. 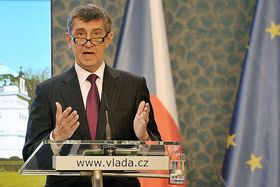 Andrej Babiš, photo: Filip Jandourek Deputy Prime Minister Andrej Babiš has warned before that the Czech Republic should not accept refugees from trouble spots and now he has voiced his concerns again. After the newspaper Lidové noviny reported the country was readying to accept 81 Syrian nationals currently living in Turkish refugee camps in the autumn, Mr Babiš said online that he didn’t believe the newcomers could integrate in Czech society. Nor did he leave out the possible security threat, pointing to recent atrocities in neighbouring Germany.

Prime Minister Bohuslav Sobotka assured the public, though, that no one who failed background security checks would be allowed in. He also indicated that the asylum seekers would have to prepare to adapt in their adopted country. Here’s what the prime minister said:

“They have to be able and willing to integrate within the Czech Republic. They have to undergo an integration programme and they will be given international protection.”

Adam Kittl of the Interior Ministry’s Department for Asylum and Migration Policy told Czech Radio that potential candidates underwent an extended application process, which determined why they were seeking refuge in the Czech Republic, also gauging the threat to their lives were they to return home. Members of the group due to arrive in the Czech Republic, he explained, had all been familiarised with the destination country and had an interest in rebuilding their lives here. Illustrative photo: Štěpán Macháček “In interviews we look at the reasons they escaped from Syria, why they are looking for asylum here and try to build closer contact to help the integration process if they end being accepted… The 81 people listed know they are headed to the Czech Republic and have an interest in coming here.”

If approved, asylum seekers can then travel to the Czech Republic where they will work closely with the aid organisation Charita. Within the national integration programme asylum seekers receive help with accommodation, employment, language lessons and access to health care. An exact date for the arrival of the latest group has not been set although. Initially reports suggested by October of this year but the vetting process could take more time. In all, the Czech Republic is to accept some 400 refugees from Syria.