Departing US ambassador Schapiro: If you’re afraid to say things some don’t want to hear, you’ll never accomplish anything

Andrew Schapiro, whose mother was born in the city, has been one of the most visible US ambassadors to Prague in recent decades. Since his appointment in September 2014 the diplomat has pursued a distinctly liberal agenda, and notably fell afoul of President Zeman, who said he was unwelcome at Prague Castle. Andrew Schapiro, photo: CTK I spoke to Mr. Schapiro as he prepared to step down on Friday – and began by asking if his own Czech connections had in any way informed his time in Prague.

“Yes, they have. There was a painting that my grandmother made – she was a pretty good amateur painter – in the 1920s.

“It was a scene in Prague, taking in [the church] St. Mikuláš and the Castle – and this always hung on the wall in my grandparents’ apartment in Chicago. And now I’ve brought it here.

“To be living in the very place where this painting was painted is to me an example of how I feel every day as I walk around these streets: This is where my grandparents, and my mom as a little girl, used to walk and live.”

As ambassador you have campaigned against corruption in the Czech Republic. You’ve supported gay rights. Has there ever been a time where you’ve felt in danger of being seen to perhaps interfere in local affairs, and to say things that some Czechs, or some Czech politicians, wouldn’t want to hear?

“I think if you’re afraid to say things that some people might not want to hear, you’ll never accomplish anything. The only way to make sure you don’t offend anyone is to do nothing – and I’m not willing to do nothing.

“I think it’s important, and it has always been important to the United States, to speak out for the weak and the vulnerable and to stand for freedom and justice. 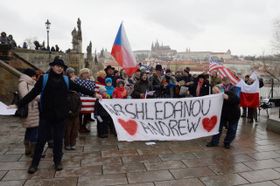 Several dozen people turned out to bid a symbolic goodbye to Andrew Schapiro, Prague, January 14, photo: CTK “We did this throughout the Cold War – taking risks of upsetting governments by standing with dissidents.

“I wouldn’t compare this [his activities] to that, it’s not even close. But it’s still important to speak out for what you believe in, even if a small number of people will get upset by that.

“I’ll tell you this: There’s probably not a week that goes by without someone coming up to me and thanking me – it might be somebody from the LGBT community or somebody who cares about these issues like corruption or tolerance.

“They say, Thanks, it means a lot to have a powerful country like the United States speaking up on these issues.”

Has your job become harder in your time here? People say that Czech society is perhaps a bit less Western-oriented than it would have been a few years ago.

“These things go up and down, historically.

“If you look at the opinion surveys, opinions weren’t so great during the Gulf War. Then they went up after Obama was elected and they’ve gone back down.

“They [relations] bounce around but are always very strong. And this is a history that goes back almost 100 years, to Masaryk and Wilson.

“So the fact that things might bounce up and down with the changes of history and what’s happening in Europe, etc. – that’s normal.”

Years from now when you look back at your time in Prague, what do you think will stay with you?

“Wow. This has been the most wonderful experience of my life, thus far.

Andrew Schapiro, photo: CTK “Of course I could say the beautiful scenery of Prague or the landscape outside of Prague.

“But really what I’m going to remember is the people. The warmth of the welcome that we received. All of the individuals who I met who are involved in and engaged in their communities, trying to make them a better place. And the connections that we built. Republican businessman apparent nominee for next US ambassador to Prague

Months ago there were reports that the next US ambassador to Prague could be Ivana Trump, the Czech-born ex-wife of President Donald… 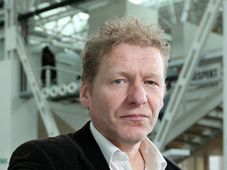 What will Donald Trump’s presidency mean for Czech-US relations? And is his ex-wife Ivana really in line to become American ambassador… 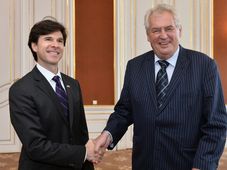