Czechs to vote in second referendum on future of EU?

It's just two days since the Czech Republic's first ever referendum, and people are already talking about the next one. Prime Minister Vladimir Spidla conceded recently that the far-reaching reforms of the European Union - to be formally presented at this week's Thessaloniki summit - would have to be approved by the Czech people in a second referendum. My colleague Rob Cameron has been leafing through the draft of the much-discussed EU Constitution and joins me in the studio now. Rob - just how momentous are these changes to the EU? 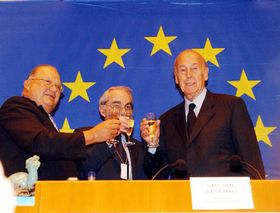 From left to right: Jean-Luc Dehaene, Giuliano Amato, Valery Giscard d'Estaing, photo: CTK Well, Valery Giscard D'Estaing, the man in charge of the EU Convention which has drawn up the draft of the Constitution, described the document as "history in the making", although looking at it, perhaps the phrase "compromise in the making" would be more accurate. Many things will remain the same - the Commission, the Council of Ministers being the most important - but there are revolutionary new proposals as well. A new post of President of Council of Ministers would be created, to act in tandem with the existing President of the European Commission. There would also be a new EU Foreign Minister, as well as more qualified majority voting (QMV) across the EU - QMV is the weighted method of voting according to size of population.

All that sounds reasonable enough - why has there been such a hoo-ha over these planned institutional reforms?

The problem is there is a fundamental conflict within the EU that makes introducing any changes at all extremely difficult. The conflict is between those who want the EU to be more united, federal body - a United States of Europe if you like - and those anti-federalists who want the EU to remain as it is - a collection of sovereign nation states acting together in an economic and political alliance.

And I gather that's not the only problem either.

No, there are many other issues as well. The EU is a delicate balance of power between big countries & small countries; that balance will be tipped next year, when 10 mostly small countries join. Under the system of qualified majority voting, a group of small countries could effectively "gang up" on the big boys - Germany, France, Britain and so on - to force through or block EU decisions. And crucial to all of this is the existing system of countries being able to veto areas of EU decision-making, which would clearly be untenable in an EU of 25 members. The power of veto was curtailed by the Nice Treaty, but some countries are still insisting on retaining it for issues which affect national sovereignty. And the issue of the veto is so controversial a decision won't be taken until after the Thessaloniki summit.

And where does Czech Republic stand on this issue?

The present centre-left coalition is broadly in favour of a closer, more federal EU (although even the very word "federal" has been dropped from first article of Constitution because it's too contentious). However, PM Spidla has said a EU Constitution would have to be approved by the Czech people in a second referendum, which would take place after the country joins the EU in May 2004. Mr Spidla says if the Czech people don't like what's in the Constitution, the country would consider using its veto to block parts or even all of it. But having spent much of this morning reading excerpts from the draft, I'm not sure Czech people would even understand it if they were asked to vote on it in a referendum.