Several of Josef Koudelka’s 1968 photos are being shown at the Mánes gallery, by the River Vltava, in a new exhibition entitled 1945 – Liberation, 1968 – Occupation. Two rooms of iconic black and white photographs show two very different sets of images: the Red Army greeted with smiles and flowers in May 1945, and Russian soldiers berated by angry crowds in August 1968. So how do the people looking at these images feel about today's Russia, especially in the light of the current situation in Georgia? 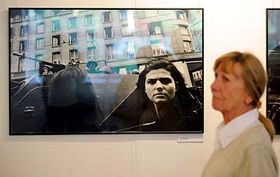 Photo: CTK Man1 - “Russia never changes. Never. They’re incapable of being free, so they don’t want anyone else to enjoy their freedom. And the tempo at which things are going, who knows, it could be us next.”

Woman - “We won’t forget what we experienced here in ‘68. Russia’s a superpower, that’s the way we look at things over here. The situation in Georgia – well, we don’t know all the ins and outs, but once again Russia has used a show of strength.”

Photo: CTK Man 3 - “I would say so but I would also say that the Russians are protecting their interests. In '68, they thought that, you know, democracy in Czechoslovakia would mean demands for democracy everywhere else in Warsaw Pact countries. Now they're basically protecting their pipelines which lead through Georgia."

Should Czechs still be afraid of Russia?

Man 3 - "I feel the only reason why not is because there is Slovakia and Ukraine in between. Otherwise, yes!"

Man 2 - “There’s a new conglomerate of western Europe and NATO and all the rest of it and I think we’ve moved on. But what happens in ten years’ time, nobody knows.” 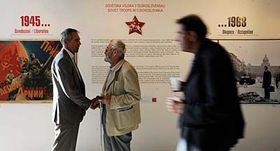 Photo: CTK So you think the idea of Russian tanks once again in the streets of Prague is not in the realms of fantasy, it could in theory happen.

Man 2 - ”Well, as Bismarck said, whoever controls Central Europe, controls Europe, so it could be happen. The frontiers have been moving over the centuries, eastwards and westwards, so you can’t predict what will happen in 50 years time. But I don’t see it happening in the next ten years anyway.”

Man 3 - “I also feel that NATO is not going to fight for Georgia, there’s absolutely no way they’re going to get involved, despite the fact they’re very friendly with Saakashvili. The Czechs, however, are now in NATO, so it’s a different story. They must feel safer.”

You mean NATO would have to act if Russia attacked the Czech Republic.

You can find more on the Mánes exhibition here: http://www.phpweb.cz/en/