The Czech men’s tennis team failed to repeat the success of Czechoslovakia in the Davis Cup in 1980, losing 5:0 to Spain in the final in Barcelona at the weekend. Things started poorly when Tomáš Berdych lost to Rafael Nadal, and got worse when David Ferrer dispatched the Czechs’ other star name, Radek Štěpánek. When that pairing lost to Spain in Saturday’s doubles, it was all over, and the Czech coach gave a run to the relatively inexperienced Jan Hájek and Lukáš Dlouhý for the two remaining matches on Sunday.

I spoke to Tomáš Berdych at Prague airport when he and the rest of the team arrived home on Monday morning.

“It’s still a day or two after the losing the final…but if I’m going to look at the situation in general and in the past I would say that it’s a really good achievement, especially for Czech tennis, because it’s after 29 years and I’m really happy about that. Tomáš Berdych, photo: CTK “But on the other hand we went to Barcelona with a little bit bigger expectations. But as we saw, the Spanish team is really the best in the world. They just proved it and they played fantastic, so all credit to them – they just deserved to win.”

Where do you think it went wrong for the Czech team?

“I would say that we had quite a lot of luck in the whole competition, during the whole year, since the first match against France…Argentina, Croatia – I mean tennis luck.

“That disappeared a little in the final, because I played a really close set against Rafael in his first match after losing in London. I lost it pretty close. Then he started to play fantastic, as everybody saw – that’s how he plays on clay. 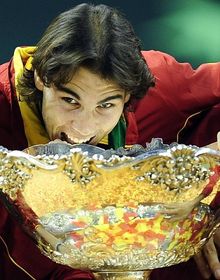 Rafael Nadal, photo: CTK “Radek had the same. He was 2:0 up on sets, playing amazing tennis, but then all of a sudden it just turned the other way and he lost his match. It was really small differences which went Spain’s way…They are better, so they deserved to win.”

You lost 5:0, which looks really bad. But I think people who understand tennis haven’t been critical of you – for example, one of Monday’s papers called you heroes. What positives do you take from the final?

“Definitely, on one hand 5:0 looks terrible. But I have to say we lost it 3:0, because everybody needs three points and whatever happens then, that’s it.

“As the captain [coach Navrátil] said, it’s really good to give a chance to the other players, because they deserve to be in the team and they’ve been there. And for the Czech team, there are not so many players who can say they have played in a Davis Cup final.

You’ve had an extremely long season this year. Will you have much chance now to take it easy before it all starts again? 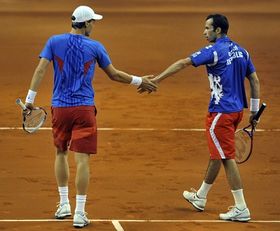 Tomáš Berdych, Radek Štěpánek (right), photo: CTK “Yes, the season was pretty long. But I think with the extension that was the Davis Cup, it was the best end of the year that a tennis player can have. I’m pretty happy about that.

“The season was long, but right now I’m just going to take a rest for a couple of days, just leave my racquet in the corner and relax for a couple of days. Then it’s back to hard work, because the season is really close – for me it starts in Brisbane in Australia. I’m leaving at the end of the month for Oz so, yeah, back to practice.”