It's a historic day for the Czech Republic - 77 percent of people backed EU entry in the country's referendum. Rob Cameron spent Saturday afternoon at Cerninsky Palac - the headquarters of the Czech Foreign Ministry - where members of the government gathered to hear the results as they came in. Rob, presumably it was smiles all round?

Yes, very much so. There was round of applause inside the Oriental Hall of Cerninsky Palac when the first results came in. I felt a palpable sense of relief all round - members of the government were smiling broadly and shaking hands. 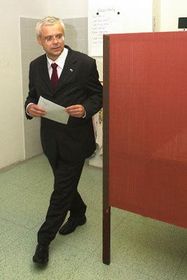 Prime Minister Vladimir Spidla, Photo: CTK Prime Minister Vladimir Spidla was the first to give his reaction to the results of referendum. He spoke in terms of this being a truly historic moment for the Czech Republic, a moment Czechs had dreamed of for decades. The Prime Minister quoted the Czech constitution, which states that all power comes from the people. The people of the Czech Republic, he said, had voted freely on the future of their country, and no-one could now cast doubt on that decision. The country's membership of the European Union, he said, marked the final end of the Second World War. He meant that all that had happened since 1939 - the Nazi invasion, the Communist regime, the Soviet occupation - had once and for all been consigned to history.

Nevertheless though, despite this strong "Yes" vote, turnout in this weekend's referendum looks like being around 55 percent. That seems quite low for a vote of such importance.

It does, but then again compared to fellow candidates Poland, Slovakia and Hungary, the figures are about the same. There seems to be a general sense of apathy in countries lining up for membership. That low turnout certainly hasn't spoilt the result for the Czech government, as I found out when I spoke to Foreign Minister Cyril Svoboda:

"The results are very positive. This is a clear mandate, which is now saying that the vast majority in the Czech Republic is behind the decision to join the EU. This is a good result, a very strong mandate for the cabinet, for the Czech country. And we are happy that the vast majority of citizens in my country are ready to decide about such substantial questions as joining the EU. So congratulations to the citizens of my country."

Foreign Minister Cyril Svoboda there, obviously happy with this result. Will he be celebrating tonight do you think?

Yes, certainly - there'll be a big party up at Prague Castle on Saturday night, with music & fireworks and so on. Although I overheard Mr Svoboda telling a colleague in the corridor that he was unable to drink alcohol - but maybe he can make an exception this evening.