On May 31st 1945, in the aftermath of WW II, some twenty thousand German-speaking inhabitants of Brno were driven from their homes and forced to walk the 50 km distance to the Austrian border. Close to 2,000 of them died of exhaustion on the way. On Saturday some 250 people took part in the 10th annual Reconciliation March held in memory of those who suffered and died in the wildcat expulsions of German-speaking inhabitants from the border areas of post-war Czechoslovakia. Jaroslav Odstrčilík, the organizer of the event, explains the significance of the undertaking. 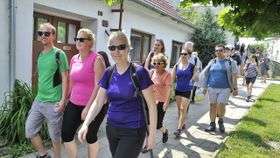 Reconciliation March, photo: CTK “In past years the main aim of the march was to raise awareness of what happened in Brno at the end of World War II and also to pay homage to those who were hurt or killed in this period. Since last year we march in the opposite direction –from Pohořelice back to Brno – as a symbol of reconciliation, as a symbol of taking something back, building on it and focussing on the present and the future.”

Last year the city of Brno issued an official apology for the wildcat expulsions –did this help the process of reconciliation?

“Definitely, this is a long term process and last year’s Reconciliation March was a sort of climax. Things that many people thought or wanted to hear -on both sides- were said and in this respect it was truly a historical event. This year we lived up to the 2015 march and we will be developing the project further next year, for instance we want to focus on Czech-German and especially Czech-Austrian relations that need to be upgraded both on a national and local level and Brno will be the entity to push them further as it pushed further the reconciliation of our troubled past last year.”

Who are the people taking part in this event?

“Most participants are of course Czechs, but we have a lot of German and Austrian participants as well, people who lived in that time or were affected by what happened back then, but also younger people who feel that this is something important and who want to be part of it.”

You say the march will evolve as the process of reconciliation does – has it evolved and if so in what way do you perceive this shift? 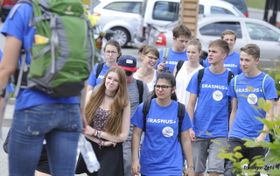 Reconciliation March, photo: CTK “There has been a huge change within the last ten years. When I launched the project back in 2006 most people in Brno did not really know what happened back then and not only that but the whole of Czech society was not willing to talk about it, was not open to reconciliation and this has changed enormously. Now, ten years later, not only because of this project but thanks to many other undertakings people know much better, they understand much better what it actually meant. You could also see this two or three weeks ago when the Czech culture minister, Daniel Herman, visited the annual meeting of the Sudetendeutsche Landsmannschaft which only two or three years ago would have been something unimaginable. In general, the way that Czech society sees these events and is able to talk about them has changed enormously.”

There are still protests against the march though –how do you interpret them? What is behind them?

“It is partly about fear and also about historical responsibility, because one of the organizers of this protest was the Communist Party whose predecessor played a key role in the events of May –June 1945. Those people think that we are actually rewriting history, many see some sort of conspiracy in it, they tell us we are being paid and organized by the Sudeten Germans which is obviously not true. So these are people who are not able to reconcile and who have a very different understanding of what happened and what is happening now. ”

With the 80th anniversary of the Munich agreement coming soon, Tom McEnchroe focused on the Czech side of Munich. Talking to the deputy director…