The Czech hockey team has gotten off to a winning start in its first game at the Winter Olympics, beating their former federal partners Slovakia 3:1 late Wednesday. The Czechs drew first blood in the match but the Slovaks soon tied. After that it was close almost all the way. 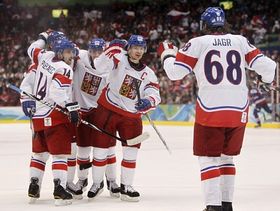 Photo: CTK The Czech Republic against former federal partners Slovakia: few could imagine a more enticing match-up for either team at the Winter Olympics. Ahead of the game, many Czechs - both pundits and fans - saw this as a ‘must-win’ for the Czech team to get off on the right foot, in a group in which the Czechs will also face Russia. On the night, both teams proved strong but it was the Czechs who went up first: team captain Patrik Eliaš scored on the powerplay ten minutes in and the Czechs dominated most of the first period.

For most of the second, the momentum shifted to the Slovaks, who came back on a goal by Marián Gáborík, who put the puck top shelf, beating Tomáš Vokoun: the game was tied at 1:1. 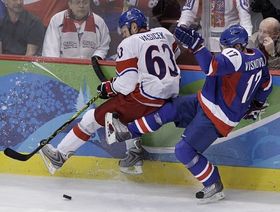 Photo: CTK Then Gáborík moved in again in a play that could have broken the Czechs - as Jaromír Jágr himself later admitted - but he hit only the post. Two minutes before the end of the second period, it was Jágr himself who scored the go-ahead goal. And the Czechs capitalised yet again with just two seconds remaining. Jágr put the puck in front of the net to Tomáš Plekanec who lifted it in. In no time at all, 3:1 for the Czech Republic.

But the Slovaks were by no means out of it: outgunning the Czechs in the final 20 minutes, getting 12 shots to the Czechs’ two. But Czech goalie Tomáš Vokoun confirmed he is in top form, blocking Slovakia from getting back in the game. The final number of shots was 35:24 but no more goals were scored, so 3:1 it ended. Afterwards, here’s what the Czech goalie had to say: 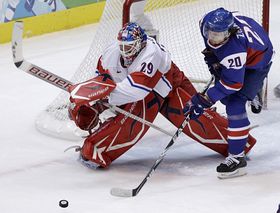 Photo: CTK “I think that the level of the game was even higher than in the NHL. Almost every one here is a star in the NHL and it shows in the speed. It is even faster and harder and it was a beautiful game. I think this was one of the best matches in terms of competition I’ve played. You’re playing against your friends, you want to do well and win. We had a bit more luck but otherwise it was a very close game.”

The Czechs will next face Latvia on Friday and toughest group opponent Russia on Sunday.