For many decades, a train station located right on the Czech-German border was a symbol for the division between Germany and communist Czechoslovakia. The train station once connected a Bavarian and a Czech town that both carried the same name in Czech - Železná Ruda. After World War II, it was defunct and even set to be demolished. Its re-opening in 1991 was one of the most significant events in Czech-Bavarian history after the Velvet Revolution. Now, both towns are once again collaborating – on a celebration of the twenty-year-anniversary of the train station re-opening. 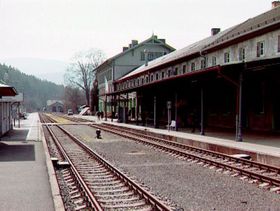 Železná Ruda train station, photo: CT24 The two towns that are both known as Železná Ruda in Czech share a long and intertwined history. The Czech Železná Ruda and the Bavarian town Markt Eisenstein were both shaped by the mining and glassmaking industries. Located in the scenic Bohemian Forrest, both towns later developed into popular tourist destinations. A mere three kilometers apart, they were first connected by train in the late 1870s. Michal Šnebergr, the mayor of the Czech Železná Ruda, says this was a huge step forward for the region.

“The construction of the railway brought a big change to this area. It was a big turn in history. It created an infrastructure and thereby attracted many tourists to this region, and of course connected Bavaria and the Czech lands.”

After the end of World War II, cross-border traffic came to a complete standstill, The border between Germany and Czechoslovakia runs through the main hall of the Bayerisch Eisenstein train station, and Czechoslovak authorities erected a wire fence to divide both sides in 1953. The tracks were severed and Czech passenger service now terminated several kilometers to the north of the border. On June 2, 1991, however, the border crossing now known as Železná Ruda Alžbětín in Czech was once again opened for traffic – and it is the 20-year anniversary of this historic event that the two towns are set to celebrate on Saturday, says Mr. Šnebegr.

Železná Ruda train station “We will celebrate the 20-year-anniversary of the re-opening of this historic railway route here on Saturday, which played a very important role in our region and for the collaboration between Czechs and Bavarians. Twenty years ago, this train station was re-opened, because during the era of the Iron Curtain, it had been closed, and there even was a wall dividing the Czech from the German side. So, in a way, this train station was a symbol for the division of Europe, in the same way that the Wall was a symbol in Berlin, this was our symbol of that in the Bohemian Forrest.”

On Saturday, visitors will be able to travel to Alžbětin from Plzeň on a historic steam train, where events are planned for the entire day. Meanwhile, on the Bavarian side, a Czech-Bavarian evening with music, food and drink will kick off at 6 p.m. on Saturday in the Alberlandhalle in Markt Eisenstein.