104 of the world's countries are now members of the International Criminal Court or ICC, the tribunal established in 2002 to try genocide, crimes against humanity and war crimes. They include 26 of the 27 members of the European Union, with one notable exception - the Czech Republic. The country signed up to the ICC in 1999, but parliament has yet to ratify it. On Monday four Czech NGOs released a statement criticising this fact, including the League of Human Rights. Radio Prague spoke to the League's Jan Kratochvil.

"The Czech Republic has always supported international justice, so this non-ratification of the Rome Statute [which established the ICC] is rather foreign to the tradition of Czech justice. It's also very important that by one more ratification, the court will be even stronger and will have better preventive force against those terrible crimes that it has jurisdiction over, and it will also be stronger to try those perpetrators."

Countries that oppose the ICC argue that their primary obligation is to protect their citizens. They do have a point don't they?

"I see the main reason as a simple lack of political will. It is just a simple misunderstanding, which arises from many false beliefs about the International Criminal Court, because it has not been thoroughly discussed so far in the Czech Republic."

But there is some discussion isn't there? The head of the government's legislative council says he'll discuss the matter with the justice minister, a member of the Civic Democrats who are largely against the ICC.

"I hope so. We think this is the right time to start the discussion, if it's not already too late. But better late than never." It’s a million to one shot – but sometimes you’re successful, says the Innocence Project’s David Langwallner

The Innocence Project is a US-based legal organisation that has succeeded in getting hundreds of wrongly convicted people out of prison.…

Friends of Mike Murray, an American citizen who was stabbed to death in Prague last week, have been petitioning against the release… 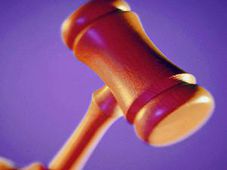 The Czech government has approved the draft of a new penal code introducing a number of new penalties and definitions of crimes. It…