Czechoslovak diplomat recognised as “Righteous among the Nations”

Former Czechoslovak diplomat Vladimír Vochoč, who helped hundreds of Jews escape from Vichy, France during the Holocaust, has been recognised as “Righteous among the Nations”, the highest Israeli tribute to non-Jews who saved the lives of Jews during the Second World War. Mr Vochoč is the 116th Czech to receive the tribute, sponsored by the Yad Vashem Holocaust Memorial in Jerusalem. 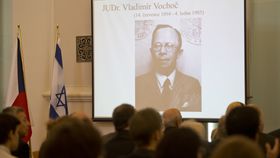 Photo: CTK Czech diplomat Vladimír Vochoč was awarded the “Righteous among the Nations” tribute for his role in saving hundreds of Jews from the Holocaust in memoriam, more than thirty years after his death. The tribute was presented to members of his family on Monday at a ceremony at Czernin Palace, the seat of the Czech Foreign Ministry.

Vladimír Vochoč, who served as Czechoslovakia’s consular official in Marseille between the years 1938 and 1941, enabled hundreds of Jews to escape from France by providing them with Czechoslovak passports. His actions were linked to a rescue operation organised by an American, Varian Fry.

According to the daily Mladá Fronta dnes, the two men made a deal. While Vochoč issued a passport to anyone proposed by Varian Fry, the American financed the printing of the false documents. They are believed to have saved around 2,500 people this way. Among the people who escaped France thanks to their help were historians Konrad Heiden, Ernst Stein or writers Walter Mehring and Leonhard Frank. 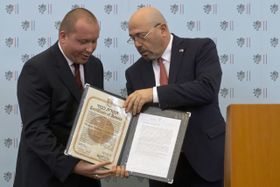 David Vochoč, Gary Koren, photo: CTK David Vochoč, grandnephew of Vladimír Vochoč, received the award from the Israeli ambassador to the Czech Republic, Gary Koren. This is what he told Czech Television after the ceremony:

“He wasn’t a typical war hero, such as we know from history. He was a man who knew how to enjoy life, but he wasn’t afraid to break the rules if needed, and he told us it was his duty to do what he had done.” 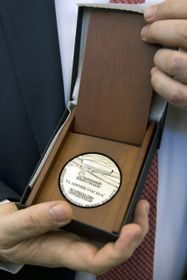 Photo: CTK Vladimír Vochoč escaped from France in 1941 and subsequently worked in the exile government in London. Despite his service to the country, he was condemned in a communist show trial on charges of treason. He spent more than seven years in the Valdice prison before being released on amnesty in 1960. He died 25 years later at the age of 91.

Vladimír Vochoč is the only Czech to also receive an award of the United Nations, and be included on a list of 84 world diplomats who risked their own lives to save Jews during the Second World War.

Among other Czechs who received the “Righteous among the Nations” tribute are Charter 77 signatories Miloš Hájek, Zdeněk Urbánek and journalist Milena Jesenská.