Czech victories in Olympics of the past

Czechs can take pride in the fact that they were among the pioneers of the modern Olympic movement. Although they missed the first games in 1896, they did take part in Paris in 1900 - thanks in no small part to the work of Jiri Guth, the founder of the Czech Olympic Committee and a close friend of Pierre de Coubertin. At that time they were still part of the Austro-Hungarian Empire. Since then Czech athletes have come a very long way indeed. We now look back at some memorable Czech moments in Olympic history gone by. 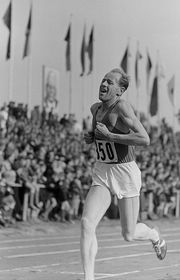 Emil Zatopek crosses the finish line at Helsinki in 1952 completing a triple win in the track and field. The man they called the "Czech Express" had crushed his opponents in all the men's long distance events, winning gold in the marathon, the 5,000 and 10,000 metres. In just six years Zatopek went on to break 18 world records. Even today if you ask almost any Czech on the street who they consider the greatest athlete ever, they'll likely name Zatopek first. He became a legend for all time. 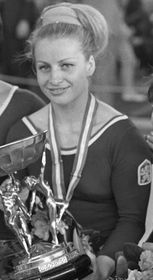 Vera Caslavska, photo: Ron Kroon / Anefo, CC 3.0 license But, of course the runner's famous victories were almost derailed. Olympic historian Frantisek Kolar says that the politics in 1952 - and a matter of principle - prompted Zatopek to put his Olympic career on the line:

"In 1952 Zatopek almost didn't compete in the Helsinki Olympics. The reason was because his fellow athlete and friend Stanislav Jungwirth had been struck from the Olympics roster, as punishment for his father, imprisoned as an enemy of the regime. Zatopek famously dug in his heels and said if Jungwirth couldn't take part, than neither would he. And of course he succeeded in the end. Zatopek won three gold medals, though Jungwirth, unfortunately, came away empty-handed."

Zatopek's hat-trick in track-and-field has never been matched. But, over the years other Czech athletes dominated their fields, not least the popular gymnast Vera Caslavska. She won seven individual medals in what was a stellar career, her most difficult games coming at the 1968 Olympics in Mexico City, just a month and a half after her country had been invaded by Soviet-led troops.

Still, not all Czech history in the Olympics has been tainted by a twisted political culture. A new chapter opened after the fall of communism, paving the way for new successes in track-and-field, canoeing, and of course the decathlon. The decathlon has been dominated in recent years by 2002's World Champion Roman Sebrle, still one of the main favourites to win gold in Athens over the next fortnight.

Finally, another one of many Czechs to watch in Athens will be legendary javelin-thrower Jan Zelezny making a swan-song appearance. He's won no less than three gold medals in three different games: Barcelona, Atlanta, and Sydney. But, he could have easily already made it four. Frantisek Kolar again:

"We shouldn't forget his first appearance at the Olympics in Seoul in 1988, where Zelezny held the lead until the last throw, and only lost the gold in the final throw by a mere 16 centimetres. That in itself is an amazing accomplishment. So yes, Zatopek, Caslovaska, Zelezny: these three are probably our best Olympians of all time. It's hard to say which of the three was greatest of all."