Czech TV's CT 24, the first 24-hour news channel in the country's history, successfully launched its trial broadcast this Monday. The service is currently only available on the internet, on cable, or via satellite. For the next four months, CT 24 will only broadcast eighteen hours on week days and sixteen hours on the weekends, in order to test the waters, weed out all potential problems, and get a head start before other television stations with similar plans enter the market. Czech TV will launch its full 24-hour service in September.

But since Czech TV's budget was not raised for the project, it has to work with existing staff. So how is it coping and what format does it have? Martin Krafl is the public television broadcaster's spokesman:

"The staff is professional and big enough to do more work for this channel. There is a news cast every hour and there are important headlines every thirty minutes. We broadcast reports and special magazines about science, economics, sport, and culture. Of course if something important happens in the world, the Czech Republic, or the European Union, we will halt our usual broadcast and feature non-stop information on the situation. Some programmes are connected with the Czech TV1 channel. They include the main evening news cast and the Good Morning show."

But is a 24-hour news channel feasible for a small country like the Czech Republic, with its population of ten million people? Media analyst Marius Dragomir: 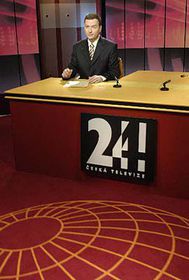 Photo: CTK "There is an audience for news everywhere and in the Czech Republic there definitely is a target group for such a station. Look at the commercial TV Nova's prime time news cast. For the past several years, it has been one of the most watched programmes. But at the same time, it's a digital experiment and at this point free-to-air digital television in the Czech Republic is practically non-existent, in terms of the number of households having the equipment to capture the signal. So, I expect this channel to have a slow start but that's normal."

But while Mr Dragomir says that the ordinary citizen may not be inclined to follow a 24-hour service, other examples in Eastern and central Europe show that Czech TV's CT24 will survive:

"I think we should look at the other all news stations in Europe, especially in Central and Eastern Europe. For example, the channel in Slovakia, which started in 2001 and the two stations in Poland. Everybody predicted that all of these stations would collapse but they have been around for three years. And in Romania, one of the news channels that was launched in 2001 already has an audience of over three percent. Advertisers are also attracted to the news channels due to the type of audience, who are usually very educated high-income people who are interested in serious and updated news and information."

And those of you who can read Czech can visit the news channel's official website for more information: www.ct24.cz 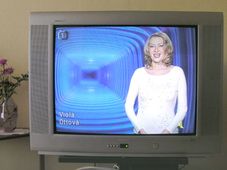 Could a news TV channel survive in the Czech Republic?

After the successful launch of the first Czech parliamentary satellite TV channel last week, one has to wonder when the electronic…

A symbolic 17th of November launch for 'Czech parliamentary channel'

This November 17th, exactly fifteen years after the start of the "Velvet Revolution" that led to the collapse of Communism in the former…