Czech top officials in war of words over migrant crisis

Relations between the Czech president and prime minister have hit an all-time low over the migrant crisis. After weeks of restraint, Prime Minister Sobotka recently accused the president of populism and “legitimizing xenophobia”. President Zeman has now lashed back, accusing the head of government of putting the country at risk by his indecisiveness and humanistic stance.

November 17, 2015 at Albertov, Prague, photo: Czech Television Relations between the country’s president and prime minister have not been cordial at the best of times, but both have stressed the need to cooperate in the interests of the country and keep communication channels between the Office of the Government and Prague Castle open. Now the prime minister is accusing the president of populism and legitimizing xenophobia, and the head of state is calling the prime minister “a cheeky boy” who is putting the country at risk by his indecisiveness and humanistic stance on migrants.

The war of words erupted on the anniversary of the Velvet Revolution when the prime minister warned against the radicalization of society and made an uncharacteristically strong appeal for the country to be open to refugees in need of help. On the same day the president addressed a crowd of his supporters sharing the stage with the head of the Block Against Islam, who is now charged with hate speech, telling Czechs that the country should be free to make its own decisions and that those who refuse migrants are neither xenophobes nor racists. 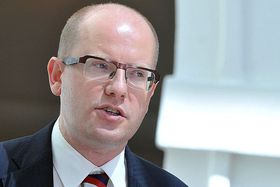 Bohuslav Sobotka, photo: Filip Jandourek The act elicited a sharp response from the head of cabinet who noted that even a directly elected head of state should not pander to the mood of the people but defend humanism and moral values. While the president’s words were clearly aimed at the Czech public, and are being linked to the likelihood of him running for a second term in office in the 2018 presidential elections, the prime minister was seen as responding to the need to address growing anti-migrant sentiments and pressure from Brussels for the country to pull its weight in this crisis. Political commentator Jiří Pehe:

“The prime minister needs to balance his act, so to speak, simply because he also has to respond to the EU, he has to make sure that he does not just ride the wave of populism at home, whereas the president does not have to do this – he is not the head of the government –and is free to engage in whatever populist politics he wants to.”

While spats between the president and prime minister are not uncommon, the words exchanged in the past few days have been uncharacteristically sharp. In an interview for Thursday’s Mladá fronta Dnes the president even accused the prime minister of putting the country’s security at risk by failing to recognize the dangers of the migrant crisis which he described as “an organized invasion”. The prime minister dismissed the idea, countering that from the start of this crisis his government had made security a top priority. Commentator Jiří Pehe says that this rift between the country’s top officials is different from the many others they have mended in the past. Jiří Pehe, photo: Šárka Ševčíková “This is a battle that cannot end in a truce, the way that we have seen in their past battles. This is a battle that needs to have a winner. It cannot be swept under the carpet and I think that whoever wins this battle will dominate Czech politics for some time. And at this point the prime minister really does not have the upper hand in this political battle. But if he wants to stay in charge of the Social Democratic Party and the government he really need to make sure that he wins this battle with the president.”