Czech state honours for foreign dissidents who protested against 1968 invasion

Soviet propaganda described the invasion of Czechoslovakia as “brotherly help” to a nation threatened by “counter-revolutionary forces”, and the Warsaw Pact forces that occupied the country in August 1968 came from Russia, East Germany, Poland, Hungary and Bulgaria. But not all the citizens of those countries agreed with the invasion, and several of them risked their lives to protest against Moscow’s crackdown. On Thursday, nine of them received medals in gratitude from Czech prime minister Mirek Topolánek. 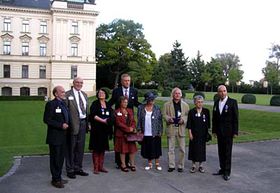 Mirek Topolánek with nine honoured dissidents, photo: Martina Stejskalová Nine dissidents, nine people from different backgrounds, nine different fates. But all of them spoke up against the Soviet-led invasion, and all of them were punished for it. Some were sent to prison, some were interned in psychiatric hospitals, some were forced to emigrate. On Thursday prime minister Topolánek. thanked them in person for their bravery.

Pavel Litvinov was one of eight Soviet citizens who gathered on Moscow’s Red Square on August 25th, carrying placards in Czech and Russian condemning the invasion. The protest lasted around 15 minutes before attracting the attention of the KGB. Pavel Litvinov spoke to Radio Prague after the ceremony: 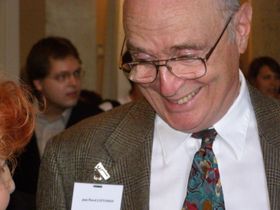 Pavel Litvinov, photo: Martina Stejskalová “Red Square was almost empty when we came, there were some tourists passing by, and we sat with our slogans and read our slogans. Suddenly KGB people started to run towards us and started beating us up. There was a KGB woman who beat me over the head with a big bag full of books. My friend Viktor Fajnberg was sitting next to me, and four of his teeth were broken by a KGB man’s boot.

Eventually a crowd started to appear and they didn’t understand what it was. We explained that we were Soviet citizens and we were protesting against the occupation of Czechoslovakia, and eventually KGB people put us in cars and in fifteen minutes we were brought to the police station. After the police, the KGB carried out searches in our apartments in Moscow, and then I was brought to a KGB prison in Moscow.

Pavel Litvinov during his exile to Siberia I spent several months in prison, then I was tried and sentenced to five years of internal exile in the Siberian mines, and I worked as an electrician in the mines for five years. In 1973, I came to Moscow, and continued to be harassed by the KGB when I resumed my activities and eventually I was arrested again and they told me – you’d better apply for an exit visa, or else we will put you in much worse conditions in a labour camp.”

Pavel Litvinov succumbed to the KGB’s pressure and emigrated to the United States in 1974, and has since devoted his life to human rights. Pavel Litvinov was not the only one who was forced to emigrate after speaking up – other dissidents were also sacked from their jobs and many found a new life abroad.