By now, many Czechs will have at least once heard or seen 28-year-old Jakub Vágner – top sports fisherman, indomitable adventurer and world-record holder for huge catches everywhere. Recently Vágner launched a new series called Fish Warrior for the prestigious National Geographic and last Saturday he scored another major coup: appearing on the famous Tonight Show with Jay Leno. Jakub Vágner, photo: www.jakubvagner.cz No Czech sports fisherman has made it as far as Jakub Vágner who, at 28 has seen plenty of adventure from Africa to the Amazon basin. The fisherman has clinched world records and humbled massive freshwater fish. He is known for TV programmes at home, for sacrificing all comforts in the pursuit of his next fish and for never killing what he catches, making him a perfect pick for National Geographic in the US and, as luck would have it, NBC’s The Tonight Show. Host Jay Leno introduced Vágner on Saturday saying he was the first Czech fisherman to have ever appeared on the program. Vágner himself then got plenty of laughs with a story of how he first heard of Mr Leno: 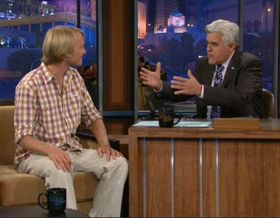 Jakub Vágner on The Tonight Show, photo: www.nbc.com “One week ago I was in the middle of the Fraser River holding a huge white sturgeon and my producer told me ‘I have amazing news for you – you will be on the show with Jay Leno’. And I didn’t hear her too well and I said ‘John Lennon?! He is already dead!’”

The fisherman described himself as the only Czech not familiar with The Tonight Show, prompting Leno to immediately mock-announce his next guest. Vágner then garnered further laughs when he discussed his biggest catch – a species of catfish known as the Paraiba.

Leno: Well… you’re… you’re a better man than I am! 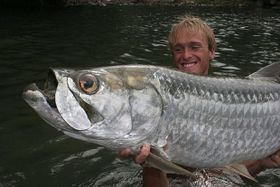 Jakub Vágner, photo: www.jakubvagner.cz On the Tonight Show, Vágner discussed not only his projects of late, but also difficulties earlier in his career – namely that he had to go against his family’s wishes to pursue it. At 17, he told Leno, he was kicked-out of the house with a few dollars in his pocket, so he headed for Australia where he first had to live in the park and survived only on scraps. A little over a decade later he is a success; he has also long since reconciled with his family. Next the young fisherman heads to Kenya where he is shooting a documentary for Czech TV, while the Czech version of his National Geographic series, Fish Warrior, will premiere in the Czech Republic in November. In Magazine this month: a drunk driver caught by police puts his dog in the driver’s seat. The famous Paris wax museum Musée Grevin… It is rare to catch world-record holding extreme angler Jakub Vágner in the Czech Republic. After all, he spends most of his time on… The Czech Republic’s most famous angler has caught a fish weighing 190 kilograms! A giant bomb shelter which was to have served as…