Every year, some 700 tonnes of food in the Czech Republic end up in waste bins, which means that every single Czech annually wastes around 70 kilograms of food. The Food Waste 2014 conference which has just opened in Prague attempts to tackle the problem and support projects against food waste. 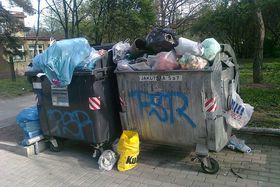 Photo: Eva Odstrčilová While some countries are fighting serious food shortages, more than a billion tons of food is wasted all over the world each year, 40 percent of which is produced by households. In the European Union alone, the number amounts to roughly 89 million tons. Michal Broža is the head of the UN office in Prague, which helps to organize the conference:

„If I look at the picture from the global perspective then we see that the food waste in rich countries, including in the Czech Republic, is about ten times higher than the food waste in the countries in sub-Saharan Africa, which is the poorest country in the world. So it is something we should be concerned about.”

According to a recent survey carried out by the IPSOS agency, some 60 percent of Czechs regard food waste as a serious problem. However, not many of them are sure how to tackle the issue. One of the participants at the Food Waste conference was Richard Swanell of the Waste and Resources Action Programme in Britain, which focuses on teaching consumers practical everyday things to reduce waste, such as writing shopping lists, planning meals ahead and learning how to measure portions to avoid leftovers: Photo: Agnés Joyaut “We found that this approach can reduce food waste both in the home and in the supply chain so in the five years we have been working on we have helped consumers reduce the amount of food they throw away by 1.1 million tons a year, which is enough to fill Wembley football stadium right up to the brim. I was therefore trying to say: here is an approach that might work and might be applicable, as the Czech Republic is thinking what it might to in this area.”

There are currently some twelve initiatives working across the Czech Republic that combat wasting of food, including a food bank network. Under the current practice, however, Czech supermarkets and salespeople cannot donate food past its expiration date to charities unless they pay a 15 percent VAT on it. The Czech Ministry of Agriculture has now promised to change this regulation as a first step in its attempt to reduce the amount of food wasted in the country. 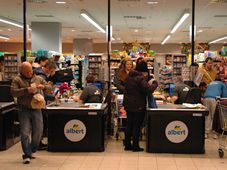 The Czech Federation of Food Banks has recorded a sharp increase in the amount of food donated to charities. According to Czech Radio,…