Members of an expert team from Palacký University conducting research on the island of Borneo revealed recently they had uncovered a new species of plant belonging to the Thismiaceae family. Highly-unusual in appearance, the initial specimen was actually found by accident, when one of the members of the team slipped and fell, only to notice the plant growing nearby. The specimen was gathered for research, and later additional samples were found. 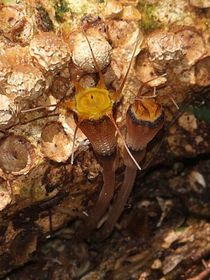 Thismia hexagona, photo: CTK Michal Hroneš, a member of the team who worked to classify the species, told me more about the discovery as well as the team’s regular focus.

“We have a few hectares of land in the area where we conduct research, where we follow the dynamics of the lowland rainforest and monitor the composition of the local vegetation.”

So you weren’t specifically setting out to locate new species of plant life?

“Well we do that too but it is not our primary goal. It is more a consequence of what we do there.”

It was your colleague who made the discovery, right?

“That’s right. It was funny the way it happened: he lost his footing on the wet ground and after falling, by coincidence, noticed a strange organism nearby. At first, he was unsure what it was, whether it was a kind of fungus or something else. It wasn’t apparent, certainly, at once. So he took the specimen to our research station where we worked to determine its origins.”

And you were able to classify the family the plant belongs to?

“Yes, we are very sure it belongs to the family of flowering plants called Thismiaceae which is very unusual as there were no records of such plants growing on Borneo before. This caught our attention and we tried to find out which species it belongs to, coming to the conclusion that the species was previously unknown.” 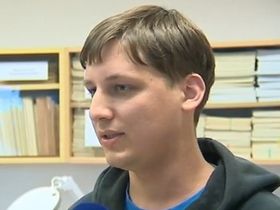 Michal Hroneš, photo: Czech Television The appearance of the plant was described by Martin Dančák of Palacký University’s Department of Ecology & Environmental studies as “very bizarre at first sight”. Were your impressions the same?

“I’d say so. The whole plant family is very strange. It has an unusual structure given that it has connections to daffodils or tulips – it has little tentacles for example – and it does not have chlorophyll. So, it does not rely on photosynthesis in its life.”

To put it in perspective, how common are discoveries like this, in which a new species is recorded?

“In the tropics, the mapping of new species is actually quite common because there is so much diversity. A lot of new species are waiting to be described. What is difficult to determine in the field is whether the species you are examining is really new.”