It was the last elusive dream pursued by one of the greatest generations ever in Czech football: an appearance in the prestigious World Cup. The last time any Czech played in one was fifteen years ago - at Italia '90. Now, it's next stop Germany. On Wednesday night, the national squad - ranked 3rd in the world - qualified by beating Norway 2:0 on aggregate. At Prague's Letna stadium players like Karel Poborsky and Vladimir Smicer celebrated, while star midfielder Pavel Nedved fell to his knees in jubilation and relief. 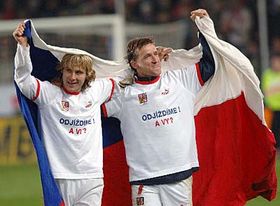 Pavel Nedved and Vladimir Smicer, photo: CTK November 16th may not be a holiday in the Czech Republic yet, but for football fans this week it certainly came close. On Wednesday the Czech national squad eliminated Norway to clinch one of five final slots in the World Cup, a story-book ending to a long campaign which, in the end, the Czechs deserved. Although the Norwegians had their chances, they were stoned early by netminder Petr Cech, back in familiar form. His clean sheet was his third in a row for the national side. Afterwards the Czech keeper had this to say:

Pavel Nedved, photo: CTK "It wasn't easy but I was glad I was able to help. In the second game we knew we couldn't concede a goal. On the other hand, they were a bit lucky too: [a couple of our shots early in the first half, including one by Vladimir Smicer], came close."

But, it was 25-year-old Tomas Rosicky, who, in the 35th minute, finally put the Czechs in the lead, on a play begun by striker Milan Baros. A deflected pass to Pavel Nedved found its way to the unmarked Rosicky, who sent a low ball past Norway's keeper. Afterwards, the midfielder was quick to describe the moment: 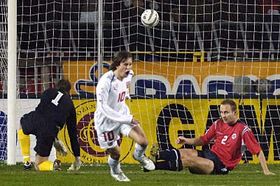 Tomas Rosicky, photo: CTK "Certainly it's the most important goal I've ever scored, and it's a wonderful feeling. It decided the game and brought satisfaction for us and the fans. Now we're headed to the World Cup."

Football's most vaunted championship will kick off next June just "next door" from the Czech Republic and Pavel Nedved, who captained on Wednesday and was key in the last two games, has confirmed that if he stays healthy, he will be there. With the World Cup so close by in Germany, the hosts can expect to see many Czechs in the stadiums chanting the slogan "Kdo neskace, neni Cech", roughly meaning "Jump if you're Czech in support of your team".