Czech Republic and Vietnam to cooperate in fighting drug crime

With Vietnamese gangs getting increasingly involved in the drug crime scene in the Czech Republic, the Czech authorities have requested assistance from Vietnam’s police and judiciary in dealing with the problem. A meeting of the country’s interior ministers on Monday paved the way for close cooperation in fighting drug-related crime. 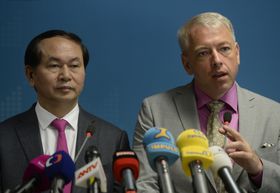 Nguyen Thai Binh, Milan Chovanec, photo: CTK Trafficking in marihuana and crystal methamphetamine made in home labs around the country has become a serious problem, particularly along the country’s western border from where the drugs are smuggled to neighbouring Saxony and Bavaria. Czech and German officials have agreed on measures to clamp down on drug trafficking networks, but the Czech law enforcement authorities have come up against a problem –infiltrating Vietnamese gangs which have become increasingly involved in drug related crime. The Czech police claim that Vietnamese gangs now dominate the fast expanding Czech marihuana market. In 2013 the police uncovered 200 illegal marihuana plantations, ten years ago it was a mere 3. When Vietnamese nationals are involved the police have problems tracing the whole network.

“We have a serious problem with the cultural and language barrier, we are not familiar with the mentality and have no officers who speak the language, and as a result we can only see the tip of the iceberg,” Interior Minister Milan Chovanec complained recently. A request for closer cooperation with the Vietnamese interior ministry met with a positive response. Following talks on Monday with his Vietnamese counterpart Nguyen Thai Binh, Minister Chovanec said the two sides had agreed on a series of measures which should significantly aid Czech law enforcement officials.

“Within the space of a month a group of Vietnamese lawyers will arrive in Prague to finalize work on two bilateral agreements – one on cooperation between the Czech and Vietnamese police force and another opening the way for convicted Vietnamese to serve their sentences in their homeland. We expect to see both those agreements signed in the autumn of this year.” 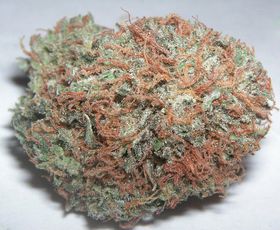 Marihuana, photo: Free Domain The two sides have also agreed on an exchange of information relating to drug crime and three Vietnamese officers who are considered experts in the field are expected to come to the Czech Republic for a month-long work stay during which time they will try to infiltrate local gangs and provide Czech officers with information on how they operate.

The visiting Vietnamese interior minister likewise expressed regret over the fact that the 65 thousand strong Vietnamese minority, which is the second largest in the country, is getting a bad name due to a small percentage of its members who are involved in illegal activities. The large Vietnamese community in the Czech Republic dates back to the country’s communist years. Today there are second and third generation Vietnamese who speak fluent Czech, have Czech citizenship and consider this their homeland.