After the French "Non" to the EU Constitution, Europe heard a resounding "Nee" from the Netherlands on Wednesday. With Europe still reeling from the shock, Czech politicians, both champions and opponents of the constitution, are sticking firmly to their views. 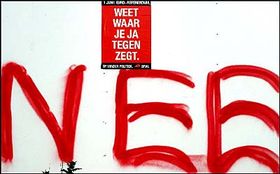 Photo: CTK Pavla Horakova has been following developments on the domestic political scene. What was the reaction of the Czech government?

"The Prime Minister Jiri Paroubek says the policy of the Czech cabinet remains the same, the government still wants to go ahead with the ratification process and seek a solution on a European level. The government has agreed that at the upcoming EU summit it will seek an extension of the two-year ratification period in order to give countries that vote "No" more time to reconsider."

Was the government unanimous in its reaction? It's not so long ago that the ruling coalition was in deep crisis... Prime Minister Jiri Paroubek, photo: CTK "The three-party government is strongly pro-constitution but there was some discord within the coalition immediately following the French rejection. The Christian Democrats announced independently of the other two coalition parties that the government should immediately suspend its information campaign on the EU Constitution. Prime Minister Paroubek dismissed their calls, arguing that the campaign has not even started. Which actually betrays the fact that the Czech Republic, as the last country in the EU, has neither set a date for the ratification, nor has it determined the manner in which the vote will take place. The Prime Minister Jiri Paroubek favours holding a referendum with parliamentary elections in June next year." 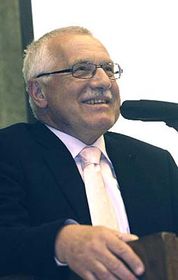 "After the French referendum President Klaus said it "clearly exposed the deep chasm which exists between the European political elites and the citizens of Europe". He described the Dutch rejection as no accident."

"Mr Klaus said that if someone interpreted the French "No" as a one-off situation, no such thing can be said after the Dutch referendum. According to President Klaus, the people of Europe showed their strength, and he hoped that Czech officials will no longer pretend that nothing had happened."

Another vocal opponent of the EU Constitution is the opposition Civic Democratic Party, for many years chaired by Vaclav Klaus...

"Indeed, the Civic Democrats share Mr Klaus's views on the treaty. Deputy chairman Petr Necas says it is a dead document and Ivan Langer, another deputy head said the EU Constitution was a dead-end street in the search for a best possible form of European integration. Party chairman, Mirek Topolanek, is against the extension of the deadline for ratification which he describes as further alienation of the Eurocrats from European citizens."