Most Czech political attention is focused on the upcoming regional and Senate elections at the weekend. Prime minister Bohuslav Sobotka, however, is looking further ahead and has created a stir with comments suggesting that his Social Democrats could form a government with the communists following the next general elections. 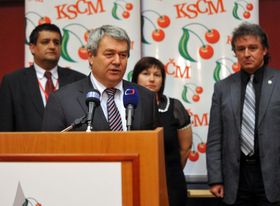 Leader of Communist Party of Bohemia and Moravia Vojtěch Filip, photo: Filip Jandourek The Communist Party of Bohemia and Moravia could be considered the leper party at the national political level in the Czech Republic since the Velvet Revolution of 1989. All major political parties, including the Social Democrats, routinely proclaim that they would not do a deal with the communists and bring them into government.

The Social Democrats enshrined that position in the so-called Bohumín declaration at its party congress in 1995. The declaration banned cooperation with extremist parties and mentioned the communists specifically. That party position still stands although deals with the communists have been done at local and regional levels.

But with general elections due in around 12 months, Mr. Sobotka in an interview this week created surprise within his own party and among rivals with the suggestion that he would be willing to welcome the communists into government under certain conditions. Bohuslav Sobotka, photo: Filip Jandourek The two main conditions are that the party drops its long standing stance that it would withdraw from the NATO defense alliance. The second is that it tones down its equally long standing critical position against the European Union.

Prime minister Sobotka is not the first Social Democrat leader who has hinted that a government with the communists might be possible. And his coalition government partner, ANO leader Andrej Babiš has made similar comments. But is it a real possibility that after so long they could come out of the cold. That’s a question we put to political commentator Jiří Pehe:

“I think that the question of the communists’ presence in central government is not whether but when – when will they actually become part of central government. I think what is really important for the Social Democrats as well as for any other party is that the communist party would just be a junior partner. That is, I think, behind what we now here from Mr. Sobotka and what we heard a few weeks ago from Mr. Babiš. 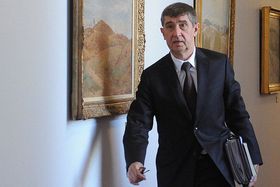 Andrej Babiš, photo: Filip Jandourek “In my opinion, Mr. Sobotka is in fact only reacting to this danger, because he realizes that if after the next election ANO is the strongest political party in the Czech Republic and has enough votes, or seats in parliament together with the communists to form a coalition, then it could really isolate the Social Democrat party. So I think that this is a pre-emptive strike from him. He is basically telling the communists, look ANO and Andrej Babiš are not the only entities or partners for you.”

While the communists could be tempted by a return to government, Mr Pehe warns that they could face a split between moderates and hard liners if they have to drop key polices enshrined by their their hostility to NATO and EU and they could also alienate their core constituency of anti-establishment protest voters.