2011 marks one hundred years since Jan Kašpar, a Czech aviation pioneer, made the first long-distance flight from a town in East Bohemia, to the famous Chuchle racetrack near Prague. Kašpar covered the 120 kilometres in a retrofitted single-engine monoplane, bought from Louis Bleriot after the Frenchman’s successful flight over the English Channel. Kašpar’s own journey from Pardubice to Chuchle was itself ambitious and when he arrived he was given a heroes’ welcome. This week, in honour of the original deed, the feat was repeated by another Czech pilot, Petr Mára. Radio Prague’s Jan Velinger has the details. 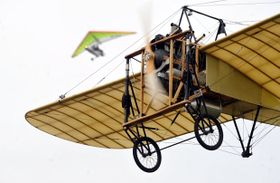 Photo: CTK Petr Mára originally wanted to repeat Jan Kašpar’s famous flight from Pardubice to Chuchle back in May, on the 13th: the exact date 100 years ago when Kašpar attempted and completed his historic journey. But strong winds then meant the attempt – in a replica of the original Bleriot – had to be postponed. Another try, last weekend, proved luckier. Although during a test run the pilot had to dump around 20 litres of fuel to shed excess weight, soon after Mára was able, without further delay, to get off the ground. Lacking navigation tools like Jan Kašpar himself so many years ago, Mára took to the air, and despite straying a little off course once – forcing him to regain his bearings by navigating along the Sázava River – he arrived at Prague’s Chuchle racetrack around three-thirty in the afternoon. 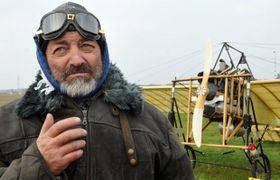 Petr Mára, photo: CTK Asked how cold it had been 500 metres above the ground, Petr Mára insisted that even in poor November weather, things weren’t too bad in the plane, although admittedly he was wearing about four layers of clothes – from his underwear to World War II headgear and goggles against the wind.

“I wasn’t cold. It’s quite physically demanding up there so I can even say I broke a sweat. As for the machine, it worked perfectly.”

By contrast, Jan Kašpar – 100 hundred years ago – flew between 100 and 200 metres above ground – but his exact route, because of today’s airspace and city infrastructure, could not be retraced. Otherwise, though, as much as possible it was a copy of the original event. Václav Vondrášek, who built the replica, says the model closely followed the design of the original plane: 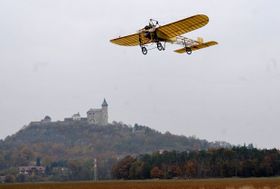 Photo: CTK “The plane is built to resemble the original and to meet specifics outlined by the Czech Amateur Aviators Association as well.”

The plane did a stronger and also heavier engine - one reason excess fuel had to be siphoned off, even though headwinds were mild. Pilot Petr Mára had been less optimistic ahead of the event, gauging the chances at 50/50: but in the end the flight went off without a hitch. Organisers now hope to repeat the flight on a regular basis – and to reintroduce other classic planes, not just the Bleriot, to Czech skies. 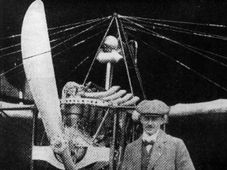 Czechs celebrate 100 years of aviation, a car-thief steals a car with a baby in the back-seat and the Prague Academy of Fine Arts…

Aviation pioneer Jan Kašpar to get monument in Pardubice