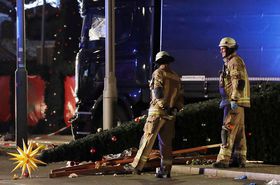 Berlin terrorist attack, photo: CTK News that a Czech national was among the victims of Monday’s terrorist attack at a Christmas market in Berlin was entirely unexpected. Although the woman’s husband had reported her missing just hours after the attack and cooperated with the German police in providing DNA samples it was not until Friday morning that the Foreign Ministry was able to confirm the news that she was one of the people killed when a terrorist ploughed a lorry through a crowd on Breitscheidplatz in Berlin. At a press briefing in Prague Foreign Minister Lubomír Zaorálek said he was deeply sorry to have to disclose such news. 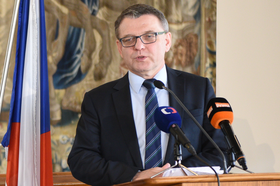 Lubomír Zaorálek, photo: archive of Czech Foreign Ministry The Czech victim of the terror attack in Berlin was the third Czech killed in a terrorist attack. The first, a young man who worked for a Czech travel agency, died in a blast in the Egyptian tourist resort Sharm El Sheikh in the summer of 2005, the second victim, in 2008, was the late Czech ambassador to Pakistan Ivo Ždárek who died in a fire following a blast in Hotel Marriott in Islamabad while helping to get others out of the building.

The death of a Czech in a terrorist attack so close to home – Berlin is a two hours’ ride away from the Czech border and visited by thousands of Czechs at this time of the year – has underlined the gravity of the threat. Within hours of the attack there were police reinforcements in Prague and other big cities. An additional 500 officers are now patrolling the streets and barriers have been put up around frequented sites such as Christmas markets. Airports, railway stations are shopping malls are receiving special protection that should remain in place at least until the end of the year.

Despite this Czech officials have appealed to the public not to let this tragedy overshadow their Christmas and New Years’ festivities. Foreign Minister Zaorálek again:

Wenceslas square, Prague, photo: CTK “I think it is important to say that we should not live in a permanent state of fear, but on the other hand it is essential for people to recognize the danger, especially when travelling abroad, and to be more vigilant than they were used to being. If you are in a foreign city, find out what is going on, keep abreast of developments and exercise greater caution, because despite all the preventive measures taken it is clear that such incidents cannot be ruled out.”

Czechs travelling abroad are also advised to register with the Foreign Ministry’s travel data base DROZD and inform friends or family of their whereabouts. In the event of problems the ministry can give them faster assistance and inform them by SMS about developments and evacuation possibilities. 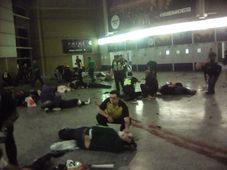 Czech student at Manchester concert: We were afraid there was more to come