Czech LGBT community shares its past

A centre mapping the history of the LGBT community in the Czech lands opened in Prague on Monday. The new space, operated by the Society for Queer Memory, houses an exhibition about the history of the Czech LGBT community offering personal stories as well as historical documents. I spoke to Jan Seidl of the Society for Queer Memory and first asked him about the aim of the new centre: 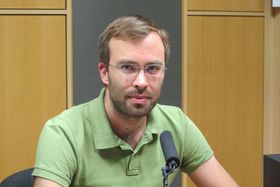 Jan Seidl, photo: Kristýna Maková “We have three basic aims. The first is to have space where the public can find out about the history and memory of the LGBT community on Czech territory. The second is for the centre to serve as a study room for scholars interested in our archival sources. The most interesting among these sources are transcripts of biographical interviews with elderly LGBT people.

“And the third aim is for it to serve as a non-commercial space for meeting of elderly LGBT people who, as they tell us, often feel lonely in their advanced age, for instance when they have lost a partner. That’s why we want to offer them a space where they can meet their friends.”

With the opening of your centre you also launched a new exhibition. Can you tell me more about it?

“We opened an interim exhibition of LGBT history and memory, which will be open to the public one afternoon a week and there will be an exhibition in the initial stage of our activity. We call it an interim exhibition, because we would like to enlarge in in the future. In this exhibition we present the results of researches in the past of LGBT people.”

You chose the date of the opening, June 1, on purpose. Can you tell me why?

Illustrative photo: Nathan Rupert, CC BY-NC-ND 2.0 “It is because June 1 is the day, when, in 1868, the first attempt to decriminalise the homosexual intercourse on the territory of nowadays Czech Republic was carried out.

“On that day an anonymous author wrote a letter to the prominent Czech physician of the time, Jan Evangelista Purkyně, in which he described the conditions of homosexual people and asked professor Purkyně to act in favour of decriminalisation of gay sex.

“Purkyně had the letter published in the review of Czech physicians and that is why this unique historical source has been preserved to this date.”