The Czech Republic is calling for closer regional cooperation in dealing with the ongoing migrant crisis in Europe. At a meeting in the south Moravian border town of Mikulov, Czech Interior Minister Milan Chovanec and Austrian Interior Minister Johanna Leitner discussed measures that would help stem the flow of illegal migrants from the south-east. 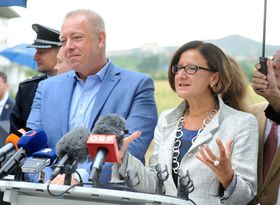 Milan Chovanec and Johanna Mikl-Leitner, Photo: ČTK As EU leaders try to reach agreement on a more balanced distribution of migrants in Europe, individual member states are struggling to deal with the growing number of illegal migrants on their territory. The number of illegal migrants in the Czech Republic is now counted in the thousands, while neighbouring Austria is dealing with tens of thousands of illegal migrants and its asylum facilities are bursting at the seams. The country is burdened by the problem to such an extent that last week Slovakia offered to temporarily accommodate some 500 illegal migrants that Austria lacks facilities for. At their talks in Mikulov, the Czech and Austrian interior ministers discussed plans to re-enforce police patrols along their common border, but Mr. Chovanec stressed that it was important for broader, coordinated action to be taken to protect other, more “vulnerable” borders in Europe. He also stressed the need for a faster and more effective information exchange.

“We have agreed on the need to improve communication between our local governments. The governor of South Moravia, Michal Hašek, will organize joint meetings between South Moravian, South Bohemian and Austrian local government representatives. We are ready to help our partners deal with the problem but, as I stressed in talks with my Austrian colleague, it is vital to put joint pressure on the countries from where the illegal migrants are coming, such as Italy.” 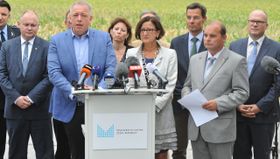 Milan Chovanec and Johanna Mikl-Leitner, Photo: ČTK The Czech interior minister pointed out that the vast majority of migrants detained in the Czech Republic and Austria came via the so-called Balkans route, crossing through Serbia and Hungary where they encounter few patrols. According to the minister around 1,500 illegal migrants enter Hungary every day but only about 10 to 30 of them get sent back. Mr. Chovanec says this is a serious problem which no one is currently paying much attention to. The Czech Republic earlier offered both Hungary and Italy officers, technology and finances to help secure their borders against illegal migrants but it was not taken up. The Czech interior minister has now repeated that offer, underlining the urgency of the problem ahead of a scheduled meeting of EU police presidents at the end of July.

Although the Czech Republic is not an end-destination for migrants, it has seen a steady increase in their numbers over the past year. In the past six months the Czech foreign police detained over 3,000 migrants, a 50 percent increase on the same period last year, and 91 were intercepted over the past weekend alone, the highest number to date in so short a space of time. The police have increased road and rail checks along the main routes to Germany, where most illegal migrants are bound and check out housing facilities in the border areas. Already the migrant crisis has taxed police resources to the limit and the interior minister has requested extra money in order to expand the ranks of the foreign police.