Czechs are marking international Holocaust Remembrance Day, or Yom HaShoah, which falls on Tuesday, with the annual public reading of the Holocaust victims’ names. The event, which traditionally takes place at synagogues or public gatherings around country, went on-line this year due to the restrictions related to the coronavirus outbreak. The event got underway at 2 p.m. on Tuesday on the website of the Terezín Initiative Institute. I discussed the details with its director, Tereza Štěpková: 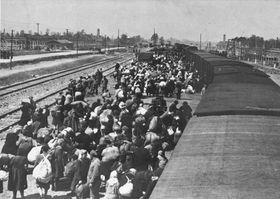 Auschwitz concentration camp, photo: archive of Yad Vashem, U.S. Holocaust Memorial Museum, Wikimedia Commons, CC0 “We were forced to redesign the traditional public reading of the Holocaust victims’ names, Yom HaShoah, and move it online. So we will meet with the people who want to join the reading and who want to read the names of the Jewish and Roma Holocaust victims in a virtual space.

“It will be broadcast on our website, the website of the Terezín Initiative Institute, for three whole hours, from 2 p.m. until 5 p.m.

So how many people have registered to take part in the event and how many pre-recorded videos have you received?

“I have to say we are really honoured and surprised by how many people will join the reading. Around 80 people will be joining the real-time reading online and we have also received about 80 video recordings from people from the Czech Republic as well as abroad, including Germany, Great Britain and Austria.”

The highlight of this year’s Yom Ha Shoah is identity. Can you explain that? Why did you chose this topic?

“We wanted to motivate people to think about the topic of identity because of its complexity. We are used to thinking about our contemporaries, but when it comes to history, especially WWII history and the communities connected with the Holocaust, we tend to look at the people as if they only had one side to their life and identity.

“But their identity is more complicated than that. We have to think about the people, the individual members of Jewish community, Roma community and LGBT community, as people who had a complex life and complex stories and we have to try to understand how they lived before the war.”