The Czech national hockey team faced Slovakia in a key contest at the Winter Games on Tuesday to reach the quarter-finals. Neither team had played convincingly in the group stage but the Czech squad turned things around: jumping to a three goal lead in the first period that knocked the wind out of their Slovak opponents. 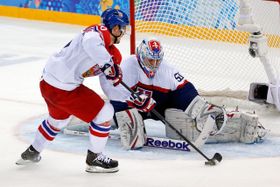 Roman Červenka, Ján Laco, photo: CTK It was do-or-die for the Czechs, featuring legends such as Jaromír Jágr against former federal compatriots Slovakia and the team was able to deliver, playing arguably its best hockey of the tournament so far. The first period left the Slovaks reeling, with the Czechs scoring three unanswered goals against goalie Ján Laco who had previously been more than solid against the Russians. Not so this time. The Czechs’ Hemský drew first blood, while Červenka scored second within less than half-a-minute and later Krejčí. He sent an unstoppable corker into the net which flew back out so quickly it wasn’t clear for a second he had scored. 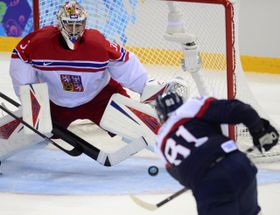 Ondřej Pavelec, Marián Hossa, photo: CTK In the second period, the Czech’s Červenka then got his second of the night, a sweet bluff backhander he put top shelf to make it 4:0. The Slovaks appeared dead in the water. A sign of the team’s quality, however, is that the Slovaks dug deep and launched an improbable comeback when Marian Hossa scored late in the second. In the third period, the Slovaks then dominated and scored twice more to bring them within reach of by one goal, turning the match into a nail-biter until the dying minutes. Tomáš Plekanec settled Czech nerves when he scored an empty netter on a power play shortly before the final buzzer: the Czechs had reached the quarter-finals.

They were not able to bask in the achievement for long: on Wednesday evening they go into action again, this time against the United States, who have had an excellent tournament. In the preliminary round, the US most notably edged Russia in an unforgettable penalty shoot-out. In the opening round, the US also won its two other matches and have featured a drive and freshness which could prove difficult to top. Former NHL player turned Czech TV hockey commentator Martin Hosták remarked that the US team reminded him of college hockey players - in a positive sense: they rarely sat back with the puck and moved into the offensive zone at every opportunity. On Wednesday, they could be hard to beat. 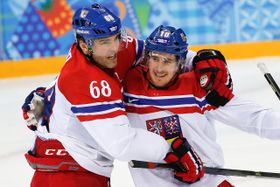 Jaromír Jágr, Roman Červenka, photo: CTK Legend Jaromír Jágr also suggested that the American team will be tough and that they had wholly earned their berth in the quarter-finals; at the same time, all fans know that in hockey anything is possible. Jágr won a gold medal back in 1998 at Nagano and bronze in Turin in 2006. Wednesday evening will decide whether he and teammates will get a chance at a medal this time around.