Czech Foreign Minister Lubomír Zaorálek held talks with top officials in Macedonia on Wednesday offering the country material and personnel assistance in dealing with the refugee crisis. The minister stressed the need to bring the flow of migrants on the so-called Balkans route under control and highlighted the crucial role of Macedonia in helping to bring this about. 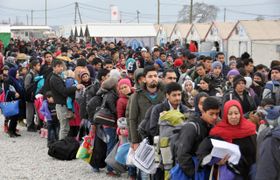 Gevgelia migrant camp, photo: CTK With Greece struggling to stem the flow of refugees at the EU’s Schengen border, part of the burden has now rolled onto its northern neigbour Macedonia. The country is close to completing a razor-fence along its border with Greece and is only letting through war refugees from Syria, Afghanistan and Iraq. Even so the pressure on the Greek- Macedonian frontier is growing by the day. Haidar Fahad, the UNHCR representative in the migrant camp Gevgelia told Czech Television the strain is considerable.

Unless effective measures are taken the flow of refugees will almost certainly swell several-fold in the spring and the Czech Republic has long been calling for a coordinated EU effort to prevent this. During talks with his Macedonian counterpart Nicola Poposki, the Czech foreign minister said that bringing the migrant flow under control on the Balkans route was of key interest not just for the states along the way, but for the whole of the EU.

“As we see it, what happens along the Balkans route will be decisive for developments in our region as well.” 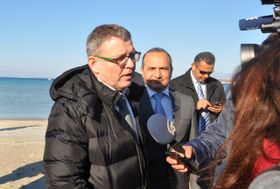 Lubomír Zaorálek in Turkey, photo: CTK Mr. Zaorálek, who is on a four day trip to Turkey, Macedonia and Greece, said it was not his aim to criticize his partners for failing to do a better job in controlling the migrant flow, but to offer assistance and help find solutions. The Czech Republic has already sent police officers to several European states to help beef- up border security. Twenty-seven Czech officers are stationed in Gevgelia where there is also a group of Czech volunteers helping migrants in the overcrowded camp.

Although Macedonia is not an EU member state the idea has been floated that if Greece fails to get the migrant situation under control the Greek-Macedonian border could in future become the de facto border for migrants seeking to enter the EU. The Czech foreign minister said it was too early to say whether this scenario would come about, but he stressed Czech readiness to help Macedonia secure its border. Mr. Zaorálek also reiterated Czech support for Macedonia’s bid to join the EU and NATO, saying that Macedonia’s admission to EU structures would help increase stability on the continent.

The Czech Foreign Minister invited Macedonia to take part in next week’s Višegrad Four meeting in Prague and expressed the hope that the drawn out political crisis in the country would be successfully resolved.

Petříček: “The Czech Republic will do its outmost to begin talks on EU expansion in Balkans”

The Czech Republic supports the start of EU accession talks with North Macedonia as it has fulfilled all the necessary conditions,…

The Czech President Miloš Zeman met with his Macedonian counterpart Gjorge Ivanov, who arrived in Prague on Thursday for an official…