The Czech football team may have come home from Euro 2008 earlier than they would have liked, but they haven't been out of the headlines. With players involved in a bar brawl in downtown Prague, and a war of words between goalkeeper Petr Čech and a senior figure in the Czech football association, it seems all is not well in and around the Czech side at present. 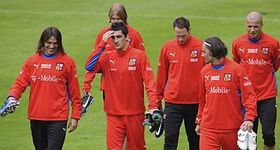 Photo: CTK The Czech team seems plagued at the moment by niggling difficulties: the search for a new manager rumbles on as does what appears to be petty squabbling between Petr Čech and Vlastimil Košťál. And on top of this, there are reports circulating in the Czech newspapers about members of the Czech squad having been involved in a fight in a bar in Prague's Old Town. Prague-based football writer Sam Beckwith spoke to me about these events and gave his reaction to them, starting with the fracas that took place in the early hours of Tuesday morning in the Czech capital:

"Given the names that were involved, the only one that surprises me is that of Martin Fenin. I think Tomas Ujfaluši, Milan Baroš and Radoslav Kováč all have a bit of a reputation for living it up now and again. So, it didn't surprise me too much. I don't think there'll be any lasting harm coming from it to be honest. Perhaps the only thing that is a little bit alarming about it is the fact that Ujfaluši was involved, he was after all the captain in place of Rosicky at Euro 2008, and this hardly the behaviour you want to see from the leader of the team." 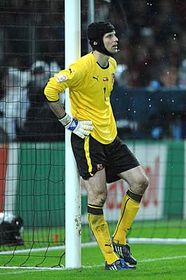 Petr Čech, photo: CTK The criticism levelled at Petr Čech by Vlastimil Košťál following the Czech goalkeeper's error in the decisive final group game with Turkey may have more lasting damage to squad morale and player-administration relations. Čech has subsequently come out strongly to defend himself on his website. Sam Beckwith again:

"What do you think Košťál was trying to achieve by comments such as this criticising Petr Čech personally for his performance in the game? Surely you can criticise players when they don't put the effort in, but at the end of the day, a mistake is just a mistake?" 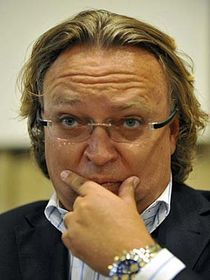 Vlastimil Košťál, photo: CTK "I think what Petr Čech said in response to this was basically true: that is, that Košťál is trying to divert attention away from problems within the management team for which he is ultimately responsible. I think he is trying to use Čech as a fall guy for any other problems that might exist elsewhere in the squad."

Finally I asked whether the appointment of a new manager, set to be announced next month, may bring stability and order back to the national side setup:

"It depends who they appoint. I think there is a good chance now that they will appoint Petr Rada who was Brückner's assistant or Josef Chovanec who was Brückner's predecessor and that's hardly a new broom, hardly a changing of the guard! If that happens it's likely that it'll be business as usual. If it is somebody else, possibly even a foreign coach then maybe there would be a change. It's disappointing to see that Ivan Hašek who was probably the best qualified for the job, backed away from the job after speaking to Košťál last weekend. I think perhaps he has had some problems with Košťál in the past and he considers that Košťál has too much power at the association for his liking."