The world of sport was quick to rally to the calls for change after the brutal suppression of the students’ march on November 17. Within a few days footballers and ice hockey players came out in what amounted to a strike until the country’s destiny was settled.

News of the events of Friday November 17 filtered through slowly to the world of sport. Football fixtures took place as usual the following weekend. But that was virtually the final whistle on sporting normality.

Sparta Prague ice hockey players wore the national colours in a league game that Tuesday with a declaration read out against the recent events. But they were still afraid of the consequences of bolder action.

On Wednesday November 22 Sparta Prague footballers announced they would not take to the pitch for the upcoming game against city rivals Dukla Prague. They said they would boycott all matches until crucial decisions about the country’s future were taken. All matches for the following weekend were cancelled by league bosses after a deputation from both teams.

One of the leaders of the Sparta “strike” was the then captain of the Czechoslovak national team and current head of the Czech football federation, Ivan Hašek.

“All the Sparta players were with me demonstrating every day against the regime. I was of course afraid because of my wife and children. It was for that reason I was afraid and it was dangerous. I was not someone who was very, very courageous. At the time there were a lot more people who showed courage. For example, it was a lot more dangerous for the Dukla players because they were the team of the army.”

One week after November 17 Ivan Hašek was called on to join the leaders of the snowballing revolution on a balcony overlooking Prague’s Wenceslas Square to address the tens of thousands of people below. 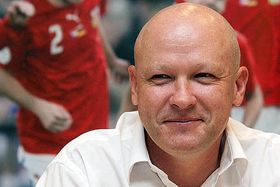 Ivan Hašek, photo: Tomáš Adamec “I was a bit afraid. I shook the hands of Václav Havel and Alexander Dubček and they told me that I would be one of the first to speak to the people. I said okay but I was not ready and had not prepared anything. I said a few words. Above all I congratulated the people who had shown they were capable of demonstrating like that. We footballers were behind all that and the possibility of changing the regime. If we were all united we could win. It was one of the greatest moments in my life.”

Football began again at the start of December. After captaining his country in the World Cup finals in Italy the following year, Ivan Hašek was profiting from the new freedom and playing for Strasbourg in the French league. 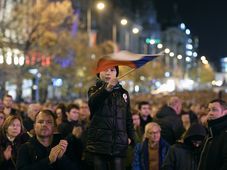