For almost three years Radio Prague has been following the adventures of a brave young Czech couple, Michal Jon and Lucie Kovarikova, who set off to conquer the world on their bicycles. We followed their travels around Asia, Australia and even the Antarctic. We last spoke to the couple after they finished the South American part of their tour and were resting in California before they rode north to Canada, Alaska and through the whole of Canada to New York City.

Having pedalled 62,000 kilometres around the world and having spent three Christmases in a row on three different continents, Michal and Lucie are just finishing the African part of their tour. Radio Prague caught up with them in Cape Town and first asked Michal about the most remarkable things they've seen in South Africa.

"Well, this country has extremely beautiful nature, the countryside is really amazing and you have the sea, mountains, a desert - you have almost everything here. You see quite a lot of animals and there are very nice people. We were invited last weekend to spend the famous South African 'braai' or barbecue afternoon with members of the Czech community and just now as we are talking we are waiting for the Czech community to come to the Czech Consulate to have a little chat with us and some coffee and juice, so it's really nice to see how Czech people live here."

In a few days' time Lucie and Michal will fly to Gibraltar where they will start the final, European leg of their tour. Cleverly, they'll avoid the shock of coming from the height of a South African summer straight to a continental winter, but still they'll have thousands of kilometres to go.

"Well, the shortest way from Gibraltar to Prague is, I guess, about 2,500 to 3,000 kilometres, but because it's winter in Europe we will have to avoid the Pyrenees and the Alps, so our route will be about 6,000 kilometres all the way to Prague. We are going from Gibraltar to Paris and Brussels and from Brussels we'll go to Vienna and then to Bratislava and from Bratislava we'll enter Moravia and they we'll go to Prague."

The best part of Lucie and Michal's three-year tour is now over and - if all goes well - their triumphant return to Prague is just three months away. The couple admit that they might find it difficult to get used to a normal life after they come back having spent three years in a bicycle saddle.

"It's getting shorter every day and the feelings are, I would say, very mixed because we know that something big is beginning to end and we don't really know what will happen when we get home, how we will be able to return to a normal way of life as our friend back home have. Because travelling by bicycle is really a bit different." 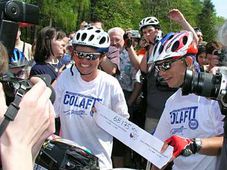 Exactly three years ago, two young Czech cycling enthusiasts, Michal Jon and Lucie Kovarikova, set off to conquer the world on their…

Czech couple cycling around the world: another year to go

Two years ago, a brave young Czech couple, Michal Jon and Lucie Kovarikova, set off to conquer the world on their bicycles. First… Czech cycling couple - one year on the road

A year ago we reported on a brave young Czech couple who decided to conquer the world on their bicycles. Lucie Kovarikova and Michal…