A popular folklore tradition known as 'Hody' takes place around this time in October in many rural areas of the Czech Republic. It's a festival that marks the end of the harvest. People dawn traditional costumes while singing and dancing well into the early hours of the morning. As Martin Hrobsky reports, this festival is not only popular in the Czech Republic.

No I am not in a village in Moravia, nor am I in a small town in Bohemia. I am in Toronto, Canada at the Moravsko - Slavacke Hody. The annual event includes a number of dancing groups of all ages, with musicians and singers bringing the Czech-Slovak community from the surrounding area together. I spoke to Roman Honig, one of the organizers of the festival:

"This is our annual fundraising event for the Morovan Dance Group - the young kids group that most of us were in when we started dancing, but now it is for our children and their children. This is our once a year 'hody' as we call it - our fall harvest and we also have a band from Europe."

How important do you think it is to keep-on the traditions of your parents and of Czech culture being in Canada?

"Well I think it's very important. I don't think you should push your culture on other people but to keep it within yourself and your children is a very good hand-down of what it was like before."

You mentioned a band from Europe, could tell me a little about them.

"Lunzhotcanka is from a small town where hody were and still are famous and they perform every year. We luckily got connected with them last year because they were on an American tour. It's a wonderful brass style band, 16 pieces and three singers. We have been fortunate that we've been getting them and it's really wonderful because we don't have any real good Czech polka bands here in Toronto."

Many of the dancers at these festivals have been taking part in these events for a long time. I caught up with one of the dancers, Mary Bilick, and asked her how long she has been performing:

"I started in the group when I was eight. My folks are of Czech background and they were in groups when they were younger and they wanted to continue the tradition on with our family so by brother and sisters and I started the group."

How important do you think it is to keep-up with your heritage?

"Its fantastic, I am 100 percent Canadian and born in Canada, but it is a lot of fun. We meet so many people, we go to a number of different places touring around the festivals. It is a lot of fun and we meet a lot of interesting people."

Traditionally, people wear elaborate costumes during the celebration which are often handed down from generation to generation. I asked Mary Honig, who also happens to be an instructor for one of the dance groups, to explain the costume that she wore.

"This costume I am wearing is a Slovak costume from Pestany and it was made by my husbands grandmother in 1921, so this costume is 82 years old. I treat it very carefully, its actually a simpler Pestany design. Some of them have yellow embroidery on the sleeves and I have a headband which is supposed to designate that I'm married but I am still trying to be free-spirited. They are multicolored, but this one is a basic one with just yellow and a basic white skirt, some of them are really elaborate and colorful. This is a nice basic one and I really like it. I am treating it very careful because it's really old and fragile and from Pestany." 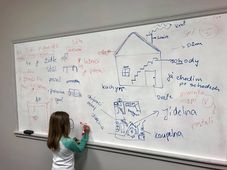 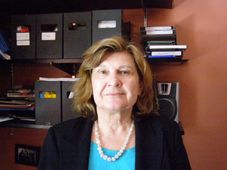