Czech communists - high in the polls - mark May Day

Until sixteen years ago the 1st of May was celebrated in grandiose style, with huge parades on Letna - the large open park to the north of Prague Castle. To this day Czech communists - mostly in their 60s and 70s - still gather here every year to hear Communist leaders speak. Music plays, sausages are sold, and supporters cheer on a famous actress or two as she pledges support. Though, it's a far cry from the old days - fewer visitors, and the odd heckler or two - in days of yore they would have been quickly swept away by men in green uniforms - much of the rhetoric has stayed the same. The head of the Communist Party, Miroslav Grebenicek, was the main speaker on Sunday, railing against capitalism in characteristic form. 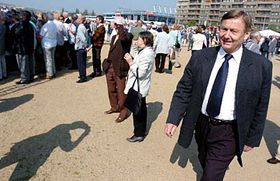 Miroslav Grebenicek, photo: CTK A mainly elderly audience welcomed Mr Grebenicek's speech, as he pointed to the economic ills and high unemployment rates of the European Union. Not all, however, came out on Sunday to show support: one protestor tried to interrupt the communist leader during his speech, a scuffle ensued, and the man, shouting that he was protesting in the name of decent people, found himself under arrest.

The irony of an anti-communist protestor being arrested at a communist rally 16 years after the fall of the old regime, didn't escape several political commentators.

Mr Grebenicek was riding high on this May Day, with a new opinion poll suggesting that if elections were held tomorrow the Communist Party would get 25 percent of the vote. That's the highest figure since 1989. Photo: CTK Still, Czech communist Member of the European Parliament Miloslav Ransdorf, while welcoming the survey results, thinks that the party should keep its feet firmly on the ground.

"Such polls are not to be underestimated results in elections are something else. We also had such results in 1999, before the 5th party congress, and the real results in the 2002 elections were different. So, we should be sober. It is welcome that the support from the local population is growing, that they share similar values that we do, but we should wait for elections."

Political analyst Jiri Pehe, a former advisor to the man who did more than anyone else to bring an end to communist rule, Vaclav Havel, also thinks the rise in communist support might only be temporary, more the result of the recent government crisis than a deep change in affinities. He expects the situation will settle down before elections next year: For many voters in the Czech Republic the Communist Party has remained a pariah - perceived as never having severed ties with a criminal past, and never having apologised for show-trials and executions of the 1950s, and countless other crimes. At some point, many pundits say the party will have to reform itself, like it or not, if it wants to play a mainstream role in Czech politics. Jiri Pehe says the first indications appeared last year:

"In the Communist Party there are two currents: one is the old guard represented by people like Mr Grebenicek and his people, and then, let's say, a reform wing represented by Mr Ransdorf, Dolejs and some others. We know that those two groups - for the first time since the Communist Party of Bohemia and Moravia was created - were struggling for the leadership of the party at the Communists' party congress last year. In the end, Mr Grebenicek and his people won, but I would argue that this is not the end. I would argue that the Communist Party will have to reform, if only because it is now part of the European structures and it will have to respond to various pressures coming from there, not just domestic ones."

Whether the Communist Party will finish strong in the 2006 election - or fade - remains a matter for speculation: for the moment the party is riding high: the Communists know they are potentially growing into the strongest party of the political Left, while the ruling Social Democratic Party implodes. Whether they can keep up the momentum, though, we'll know in roughly one year's time.