The Czech Roman Catholic Church closed its plenary assembly on Sunday, at which it reviewed an eight year analysis of the current state of the church in the Czech Republic. The meeting took place at the south Moravian place of pilgrimage, Velehrad, where priests Cyril and Methodius preached Christianity to ordinary people in Old Church Slavonic in the ninth century.

Velehrad The Czech Republic is one of the most secular countries in the world. Fewer than 3 million Czechs said they were Catholics in a 2001 national census, suggesting that the number of Catholics in the country had dropped by over 30% in just ten years. That number has changed little since then and the Catholic Church now hopes to change its strategy and use new ways of approaching Czech society. Catholics around the country are to become more active within their community and "set good examples" in their neighbourhoods and work places. Martin Horalek is the spokesman for the Czech Bishops' Conference:

"We have to try to find ways to speak with people about our church, belief, life, and God, to present them in modern ways. For example, we have to discuss them with the younger generation on the Internet or be able to prepare interesting reports on the television stations and radios. It also means that older priests and the other older people in the church have to somewhat re-shape their belief or way of living because they are frightened by the internet and modern media." 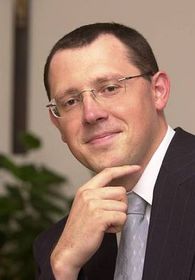 Martin Horalek But what is it like here, in this very atheist country, when you approach people?

"It is true that we are in one of the most atheist countries in the world. But on the other hand, this situation opens new possibilities for us because we have little to lose and so we can try new things and ways. If they are successful, they can be applied in other countries. It is mainly about having the courage to try something new. Then, we will see."

When you say 'new ways', do you mean using the internet or more modern media?

"Yes, I have an example. A priest organised a disco evening for young people. It was not about religion or God and there were no crosses on the walls. The priest just set the basic rule that there would not be any use of drugs. He tried to talk to the youth about basic morals, sex, and other topics. He just wanted to talk to them and be with them. There was a church near the disco and some of the young people actually wanted to spend part of the evening in the quiet church. I think this could be the way to shape the youth, a new way to deal with the younger generation."